When I made my supply score about a month ago, half of it was embroidery floss - almost 1,000 skeins - and the other half was a ton of beads.  (No, I'm not going to count the individual beads)  The floss has been, mostly, organized now.  I still have to finalize my plans to store the "back stock" - all of the duplicate colors that aren't on bobbins.

So the next project was sorting through the massive pile of beads and beading supplies.

To be totally honest, I had a bit of buyer's remorse about getting the beads.  It was the beads my friend had first told me about when she saw the ad.  My reaction was kind of, "meh" - I could take them or leave them.  Then she told me about the floss and that got my attention.  I figured if I was going for the floss, I'd throw in the beads too.  But afterwards I kind of regretted it.  I wasn't sure how much of them I would even use.  I was really only interested in tiny seed beads, for Arabian costume making, and at first glance I wasn't sure how many "useable" beads there really were in the whole lot.
Another issue was how in the world would I sort through and organize thousands of tiny beads.  It's not as simple as cutting up more cereal boxes, like I do to make an endless supply of floss bobbins.  I need containers, lots and lots of containers.  A lot of the beads were already separated by color or size and put into containers. 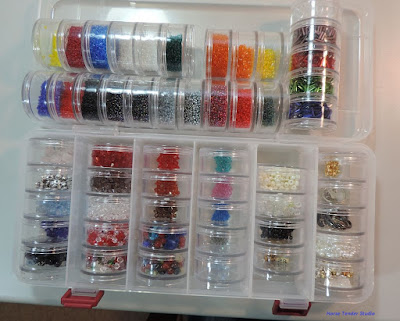 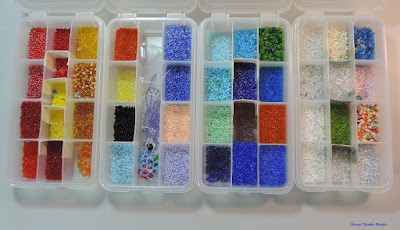 However there were still quite a few in mixed batches and I wanted to separate out all of the colors. 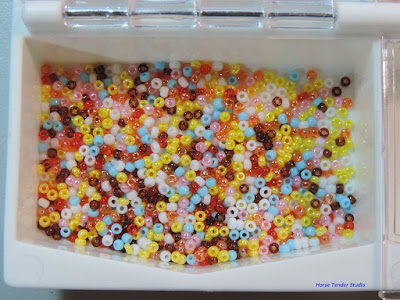 This was important, because:

1) I actually enjoy such "tedious" tasks as sorting seed beads by color.

2) I wanted to know all of the colors/sizes that I had and how many of each, for future project planning. 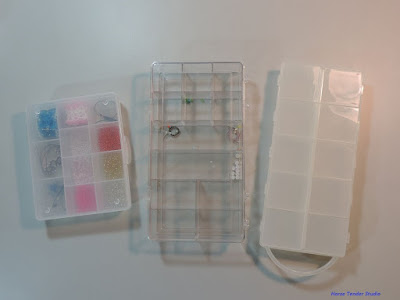 I started with a trip to the base thrift store and bought a few odd random divided containers.  That was a temporary solution.  However I wanted everything to match, be stackable, etc, versus a collection of oddly shaped and sized containers.

Then I thought I'd check the (**magical**) 100 yen store to see what they had.  My thought was I'd buy a ton of their version of the "bead box" which I had hoped would fit my floss bobbins, but it too shallow.

Instead, I discovered these. 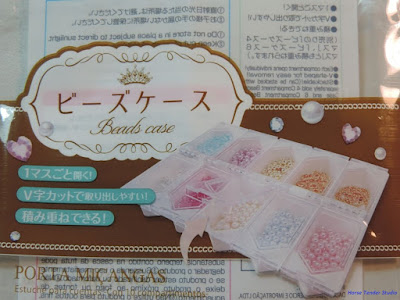 Even better than one big lid, subject to having the whole container of tiny beads dumped due to my clumsiness, these have individual containers with lids.  Sort of like a pill container, but MUCH nicer.  They are made of a strong plastic, certainly nothing flimsy about them, and the lids LOCK tightly closed.  No bead spilling with these things.  They are actually labeled as Bead Cases and another amazing thing about their design is that the bottoms are slightly rounded in the corners, so it is effortless to pull out tiny beads or whatever with your fingertip.  They won't get lodged in the bottom corners.  Oh, and they stack.  All three sizes are the same dimensions.

(I feel like I'm writing a sales ad for these things, but I can't say enough about them.  Seriously, they are that awesome)

I initially bought a few, along with a plastic box that will fit a bunch of them neatly inside of it. 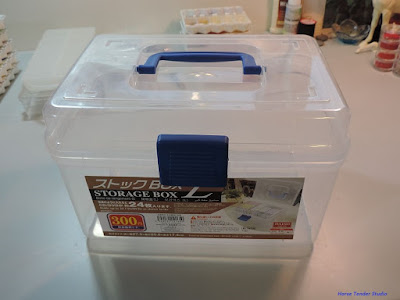 Since the first trip, I've returned and bought several more of these amazing little boxes.  (and I'll be buying MOAR for sure - I think they will be perfect for storing tiny tack-making hardware and so on, as well as beads)

I've been using the 4 slot ones as sorting trays...

the 6 slot boxes to hold some of the larger beads... 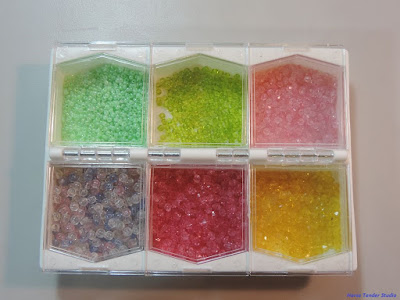 and the 10 slot boxes (my favorite!) to hold most of the sorted seed beads.

My grand plan is: once I have ALL the beads sorted, to then arrange them by color and size.  Then they should be ready to use on all sorts of projects.

I'm happy to report that the buyer's remorse is now gone and I'm really happy I added the bead haul to the floss haul.  There really are some gorgeous beads in here - lovely pearl and metallic colors, some multi-colored, and some really pretty vibrant shades - and I can't wait to use them.  I'm sure they will be spotted in model horse costumes or in my tatting.  As it turns out, the seed beads that are too large for costumes are a great size to use with tatting.  ;)