Happy Sunday!  (to those of you in the U.S. - here in Japan, as of writing this, it is Monday morning)

Yesterday we watched the Misawa City Festival float parade again, this time in the rain. 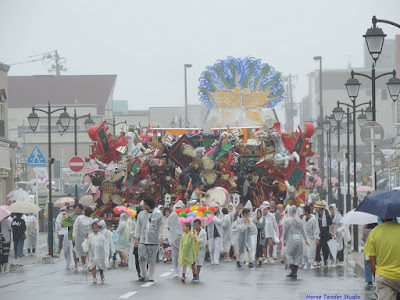 There has been quite a bit of rain here lately.  Typhoon season is in full swing.  I took this picture last week from the window of my studio room as one was coming in.  That one brought heavy rain, some flooding, and enough wind to shake the trees around a bit for about an hour. 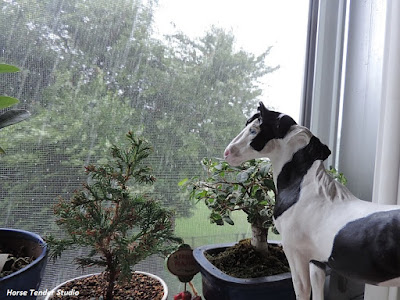 Right now there are three of them on the map!

Side note: the above website, earth, is very cool!  I have used it a lot since we've been here, to see what the wind and ocean are doing.  The currents actually move on the screen and it is fascinating thing to watch.

The storm that passed by yesterday is to the north, just off of that picture.  The lower two are headed our way today and tomorrow.  We are, approximately, at the red dot I put towards the top of Honshu (the main island).

The next storm coming is said to have 80mph winds and gusts of 100mph.  We've seen wind like that in South Dakota (in storms that don't even make the news outside of the area - or even just on a "windy day"), but if they remain that strong once they reach us, it'll be a first for us here.  Jeff's comment was, "We may get to see why they build these houses so strong."

I'm not too worried about us, but I do hope everyone fares well in the coming storms.