Yesterday, Jeff and I went on a bit of a shopping trip and ended up going to the (magical) 100 yen store for some things he wanted.  I always find stuff I want there too.  I've been trying to get a few things here, a few things there, so as not to buy all the things/spend all the money at one time.  I figured I'd go ahead and share my new finds, since that's a thing I've been doing...  This post is actually a combination of things I picked up last week while out with friends, and yesterday with Jeff.

The first two I had actually picked up last week. The "embosser" I thought was interesting for paper crafting, but the compass cutter has me really excited!  Perhaps I'm sheltered, but I never knew there was such a thing. 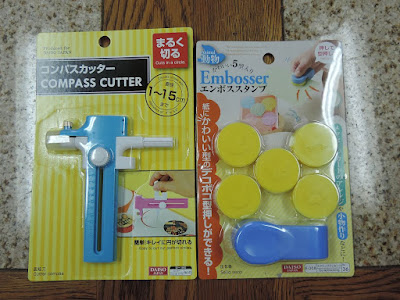 I had to open it up right away and try it, it was pretty cool.  I bought it for paper, but I'd imagine it would work on (thin) leather too. 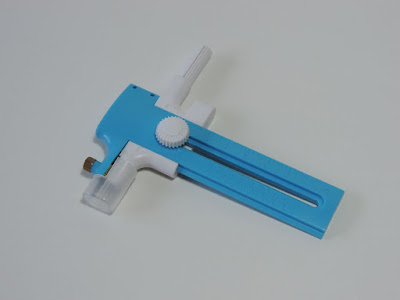 Also in the cutting stuff department, yesterday I picked up a rotary cutter (something I have heard of, but have never used) and a pair of "Smiley Face" sewing scissors - to replace my apparently DULL little scissors I'd tried to use in my recent video.  The store had several pairs of scissors and even a few of these type to choose from, but I liked these because of the smiley face...  and because they came with a case for the blades. 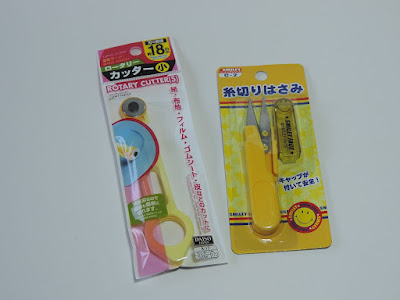 Another "embosser" set.  There are 3 or 4 different ones at the store.  I had the animal one (on the right), but next I added the flower set to my collection. 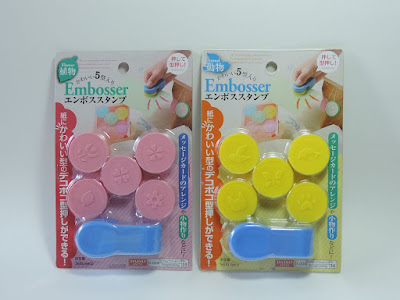 A while back I came to the realization that I just have too many crafty interests.  I had thought that I should get down to one or two and just focus on them.  I pretty much decided that it would be model horses and paper crafts.  I think I'm going to try and market my paper crafts over here and model horse things online.  As much as I'd love to do only model horse stuff, I might have trouble marketing it over here.  ;)  I have some loose plans to see about starting up some interest in model horses here, but we'll see how it goes...

In the meantime, I also now have some beautiful new papers for making cards, tags, bookmarks, etc.  I think these papers are meant for origami; they are all square.  I'm attracted to things with intricate patterns and nature-inspired themes and you certainly can't beat the price: 80 cents USD for (in most of these packs) 100 pieces of paper.

"Old paper", various patterns to look like old letters and so on.  I've seen a lot of neat paper crafts featuring such patterns and I certainly like this idea rather than trying to tear up/cut up an actual old letter!  (something I'd never do, by the way...) 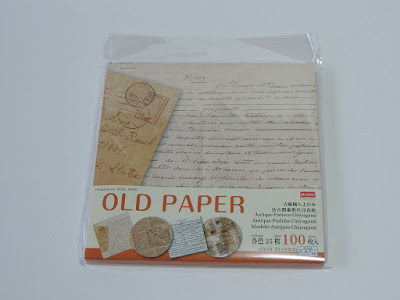 Wood grain patterned paper.  I was excited to find these. 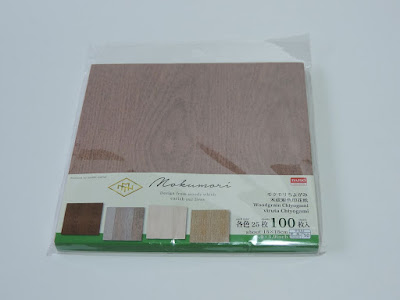 Gingham patterned paper in a few different colors.  Not necessarily my thing, as far as a pattern, but I thought it would be neat for a lot of country-themed items. 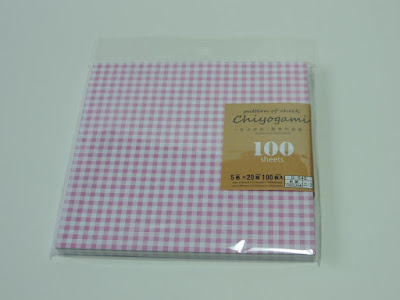 I was thinking it would be neat to find some paper that looked "Japanese", that's when these papers stopped me in my tracks.  I grabbed two packs of them - and if I see them again, I'll grab more.  What I'm not sure the picture captured was the delicate metallic gold border around each individual leaf.  While I can't see much of what else is in there, just based on the top piece: this paper is beautiful. 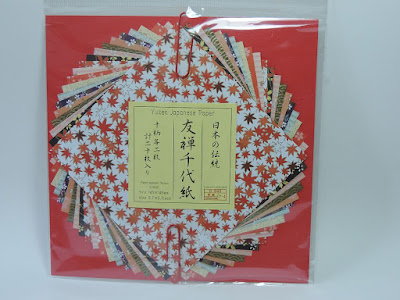 It reminded me of the handmade paper pack that I got during an early trip to the 100 yen store. 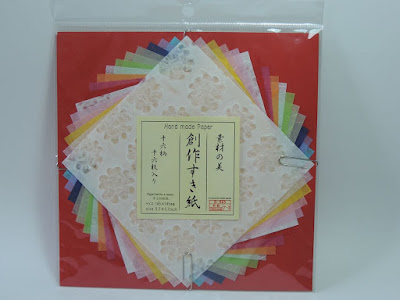 Another exciting and accidental find was what I think will make for a great footing for mini scale photo showing, and maybe even one day, performance showing.  It should at least be a lovely base to build footing or a scene on anyhow.  It is a "cloth sticker".  It has just enough texture, I thought it might look okay as small scale mowed grass.  I snapped a quick picture to show it off here: 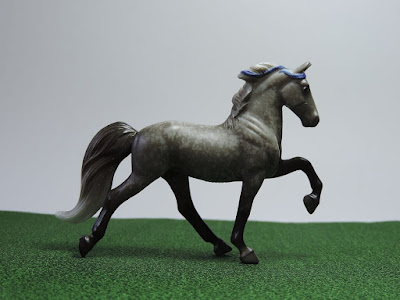 I think it will look good with micro mini scale horses (maybe even better as it seems the texture is actually finer than I thought).  I didn't have a micro handy though.

I also grabbed one that is off white color; I think it might look good as arena sand.


Lastly, a couple of new critters from the figure store where I've been finding little horses and dogs.

Check out this little cutie! 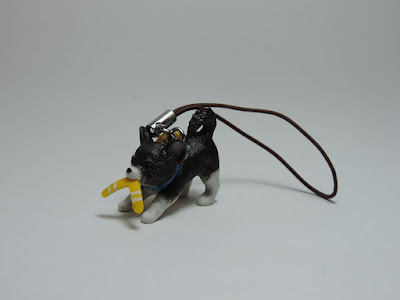 He will need a bit of surgery to remove the loop and tag from his back in order for him to be a prop dog, but I thought he was adorable. 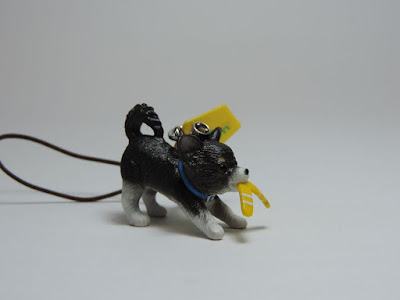 It looks like he's playing keep away with a boomerang.  Why a boomerang?  I don't know.  It seems that the answer to anything whacky that we see here is: "Japan". 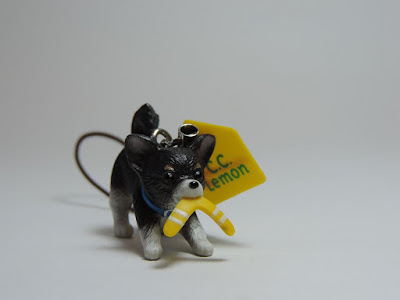 (a funny side note, C.C. Lemon is actually a drink that Jeff has discovered here and he really likes it.  He thought it was funny that I found a little pup with their tag)

Last up we have...  well, this is kind of disturbing. 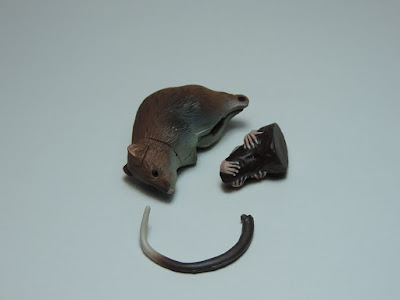 I saw all of the pieces in the little bag and thought it was a "build a rat" kit.  That's why I got it.

Unfortunately this appears to actually be some sort of a factory oops.  The feet seem to have been left out when the body halves were put together.  The tail also doesn't seem to clip into where the tail is supposed to go.  So this is the best I could do for assembly, without tools: 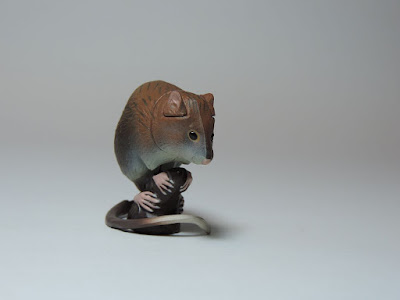 She needs a little help in the surgery department too.  She is way too big to be a prop (or is she... giant sewer rat??  haha) but I thought she was cute and she looked like she could use some help.  ;)  I suppose she could be a mouse or a rat, but I'm going with rat, since I like them the most.

At some point I'm going to have to sit down with some tools, epoxy, and paint to spruce up my little critter finds.  I have a few others now too, but more about them at another time.