After we spent some time with the first herd, we ended up back near the gate into the area.  We hoped that we could find the very first group we'd seen as we passed through the gate a few hours before.  Luckily, they hadn't gone far.  They were just a little ways off the road, just over a slight rise 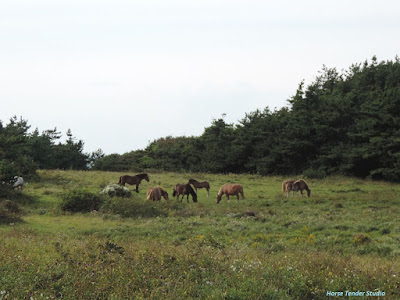 The first one we got close to was this HUGE mare.  The ground actually shook when she walked.  She wasn't overly tall, but...  quite obese I'd say.  She didn't seem interested in us at all. 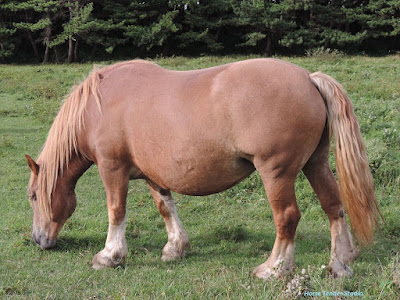 I headed straight for this beautiful girl.  She was the only grey we saw and I loved her coloring. 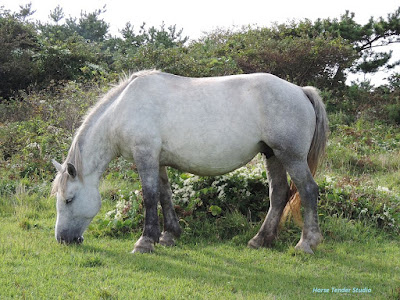 She ended up being as sweet as she was beautiful.  She was kind, not pushy at all.  When I offered her a carrot, she gently took it.  Then when I walked away, she nickered softly.  She was the only one who "said" anything to me. 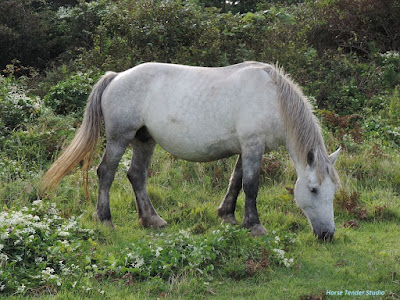 There were also two bay mares in the group. 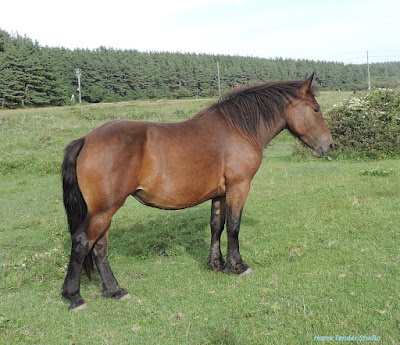 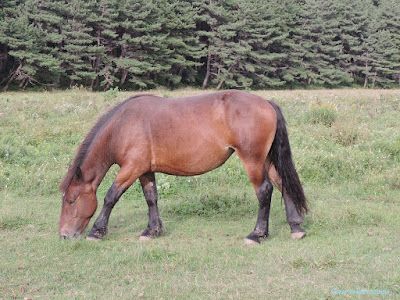 Also, this bay colt, who ended up being quite the character. 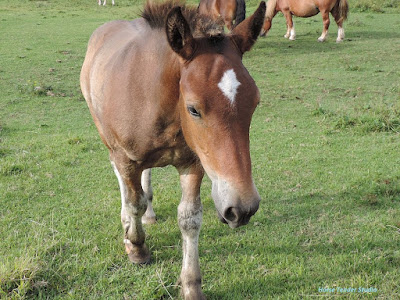 He was greatly interested in us and apparently fascinated by Jeff's shoes. 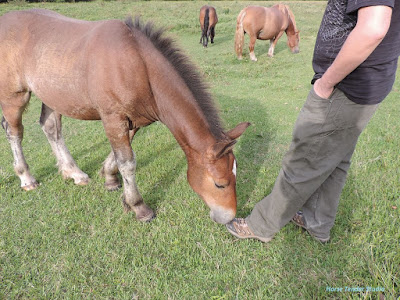 He was very pushy, demanding treats.  I treated him as I would any pushy young horse that I had in training; I moved him out of my space several times and certainly didn't reward him until he was respectful.  I don't think he was sure what to make of me.  It seemed he was quite used to getting his way with people. 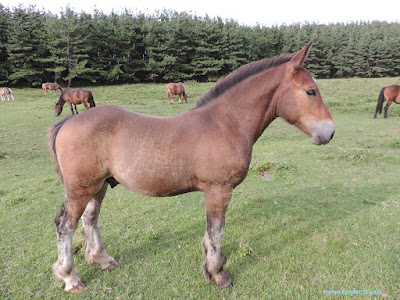 He seemed to learn fast though and stopped trying to crowd our space.  Though he did follow us around most of the rest of the time we were there.

A bit later, as we were looking at the other horses, I noticed that he seemed to have a persistent itch between his front legs. 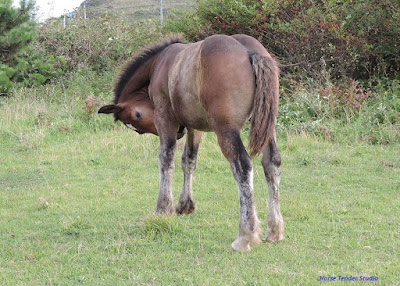 I pointed it out to Jeff and he went over to see if he could assist. 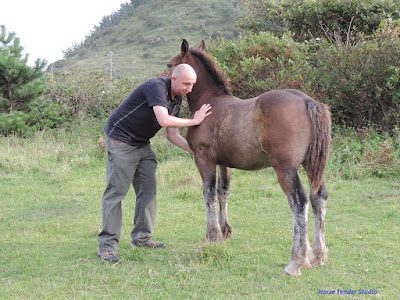 Ohhhh boy, that feels good.  He was all stretched out, pushing into the scratching, "pooky lip" and all. 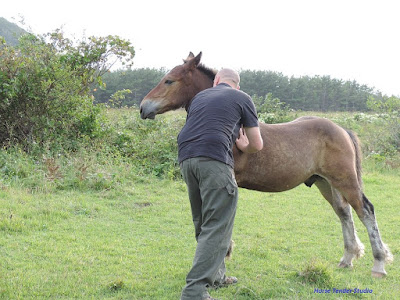 Jeff was laughing at how into the scratching the colt was.  Finally, Jeff said, "Okay, that's enough." 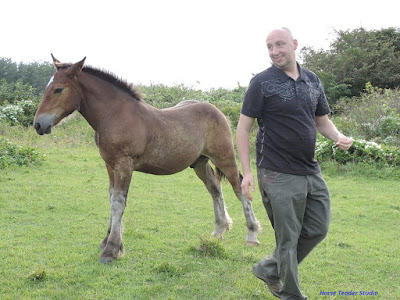 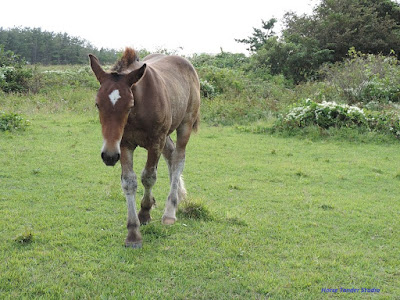 Jeff petted him some more, 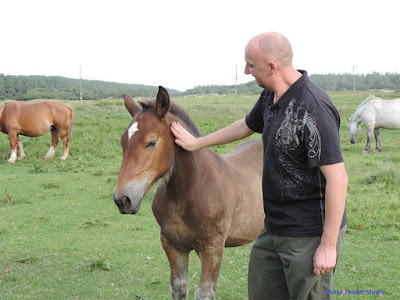 and stumbled across another good itchy spot. 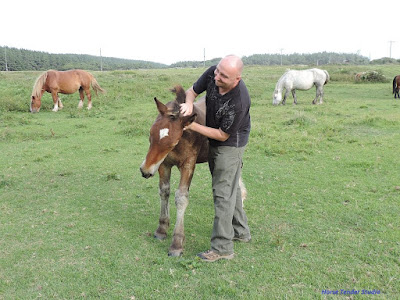 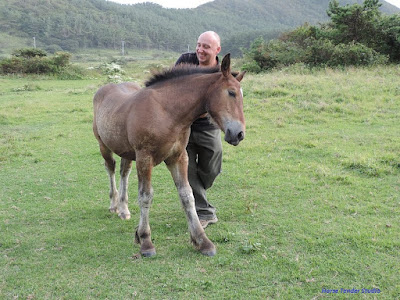 "This is killing my arms!"  Jeff said.
"Sooooo good," the colt seemed to say. 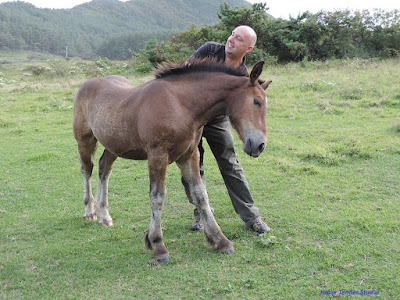 There was another colt with this group, but he seemed content to stay near his mom. 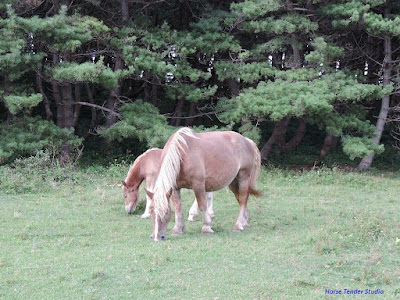 We did go over and visit with them.  Jeff petted this colt too, but he wasn't as personable.  His mom was also very protective, chasing off the bay colt when he tried to join us. 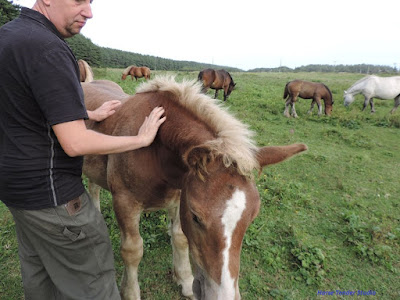 BIG baby, getting a snack. 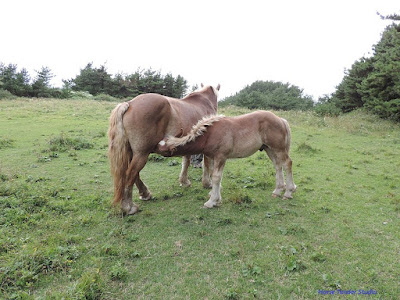 As we were getting ready to go, I noticed that the colts were grazing near each other. 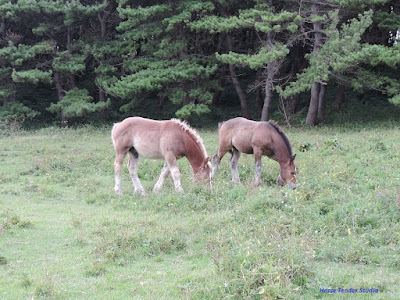 So were the bay mares. 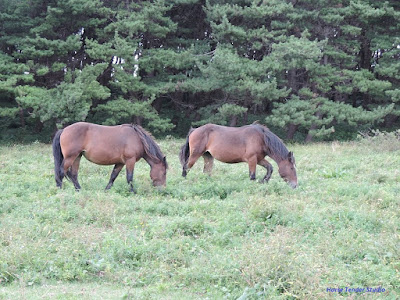 Right before we left, it was revealed that the lovely grey mare was our itchy little bay colt's mom! 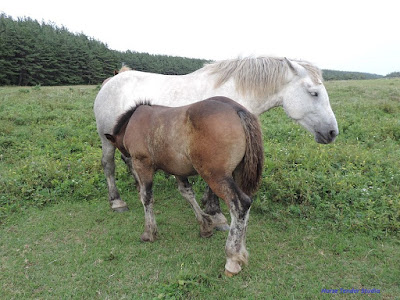 One last picture of my favorite pair. 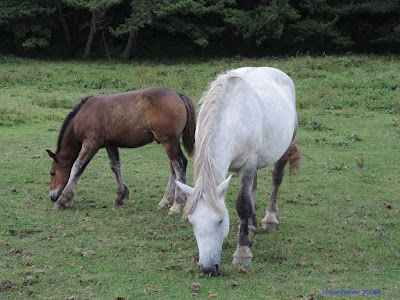 On the walk back to the car, I turned back to look at the herd several times and the last time, I started to cry.  I told Jeff that I felt like I was trudging back to a horseless existence.  He hugged me and said he'd try to make sure I could be around horses as much as possibly while we are here.  So far he's been doing a good job.

Yes, I took a picture of my dirty hand as soon as we were back in the car. 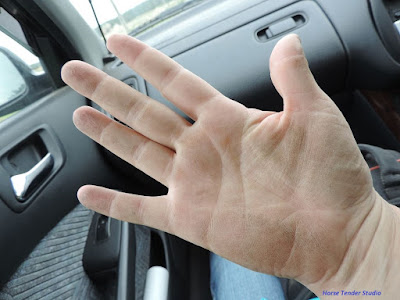 For the rest of our evening, I kept smelling my hand.  Horses do have a magical scent.

I'm hoping to go back up and visit the wild horses again, maybe soon.