This is something I've done a handful of times over the years and found myself needing to do it again, only this time I thought - why not make a blog post out of it?


As I may have mentioned before, I'm all about maximizing my supplies and wringing all the use I can out of them.

One group of items I've been making for over 12 years now are cross necklaces made out of horseshoe nails. Historically, they have actually been my best seller and I've given away as many or more of them over the years too.  I learned how to make them from one of those "assemble jewelry at home and get rich" type of companies.  The whole assemble-at-home-and-send-to-them-to-get-paid thing didn't work out like they had promised, no big surprise there I guess, but I also received the rights to sell them wherever and however I wanted to.  So that's the direction I headed off into.  I've made a ton of them over the years.

Every now and then I decide to recycle some of them, that is stripping off the wire and changing colors.  The nails are the hardest supply to find for the whole deal - they are actually pony nails - so I have reused several sets of nails over the years, stripping off old wire and replacing it with new.

One of the most popular color combinations that I've come up with is one that I call "Buckskin Copper".  (inspired by buckskin colored horses, of course) 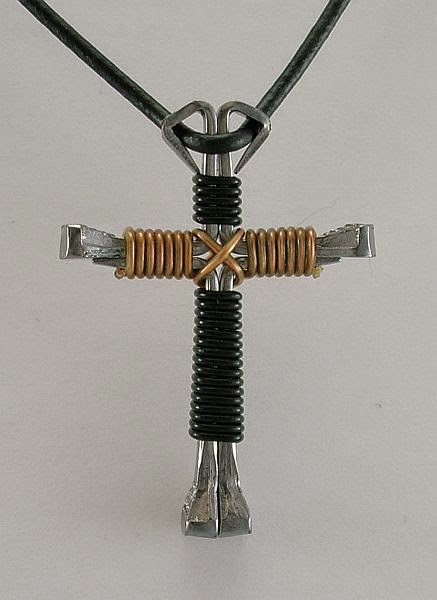 Today I decided to do a small restock my inventory of this color, after selling a couple and receiving an inquiry on more of them.  I opted to recycle the nails from a few of my personal necklaces, converting them to Buckskin Copper crosses.

I started with three of my patriotic Red, White, and Blue necklaces that I've worn over the years. 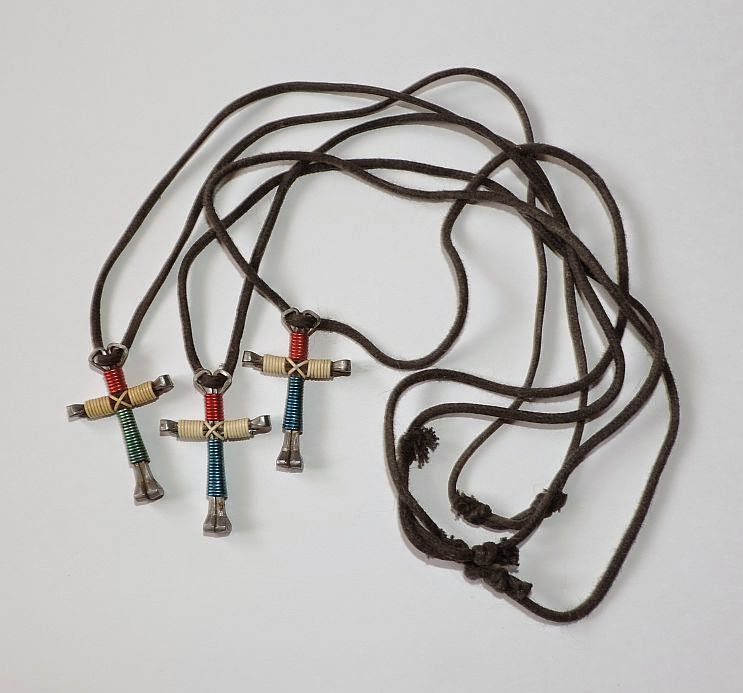 First, I gather the supplies and tools, new wire... ...and the needed tools. 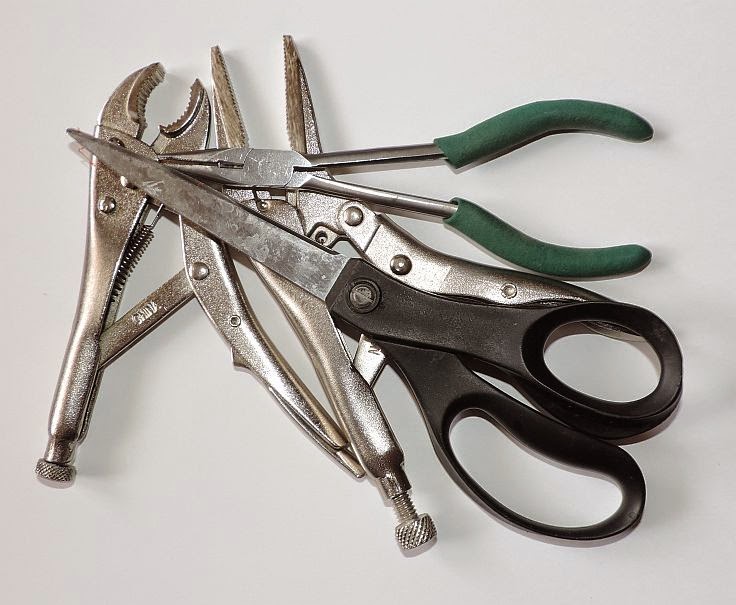 First step is to cut off the necklace cords, leaving just the crosses.

Then comes disassembly, unwinding all the wires and being left with a pile of nails and crusty wire. 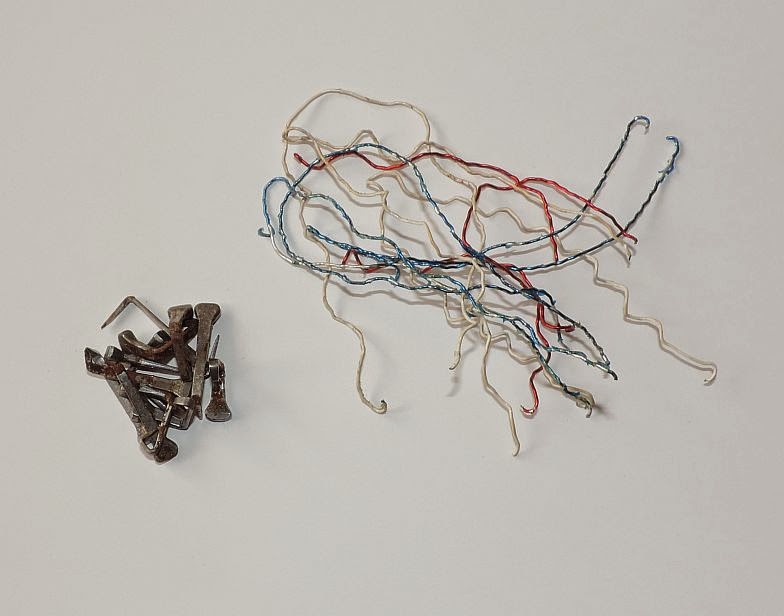 The wire is thrown out, there's just no saving that... and the nails will be used to make new crosses.

After stripping the wire off, it's time to prep them, sanding off any old clear coat, rust, etc.  Clear coat applied when they are new prevents rust on the nails, but after so many years it can be worn off.  New nails don't need prep, but after so long, these nails were a bit rough.  Nothing a little sanding can't fix.  As with a lot of things, prep work is so important to the finished product! 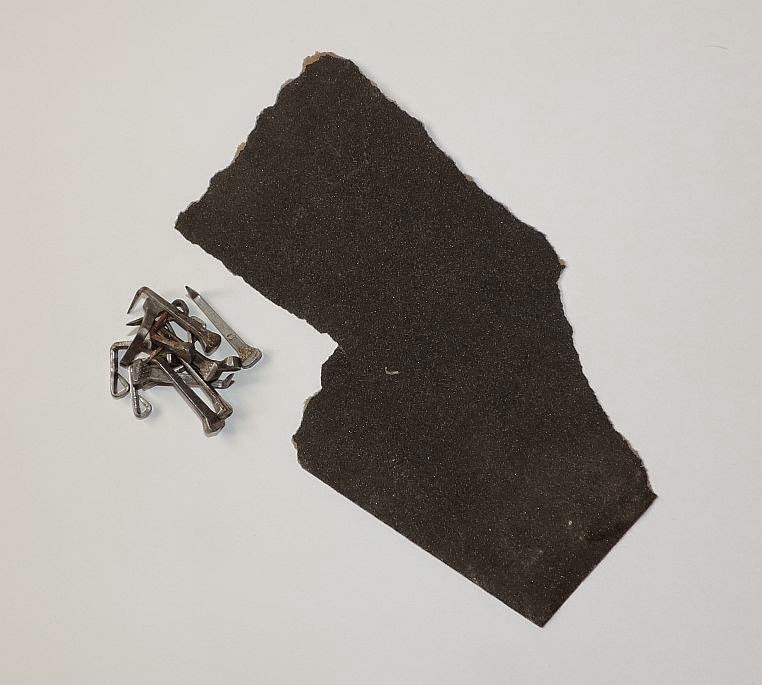 New wires, measured, cut, and ready to put on: 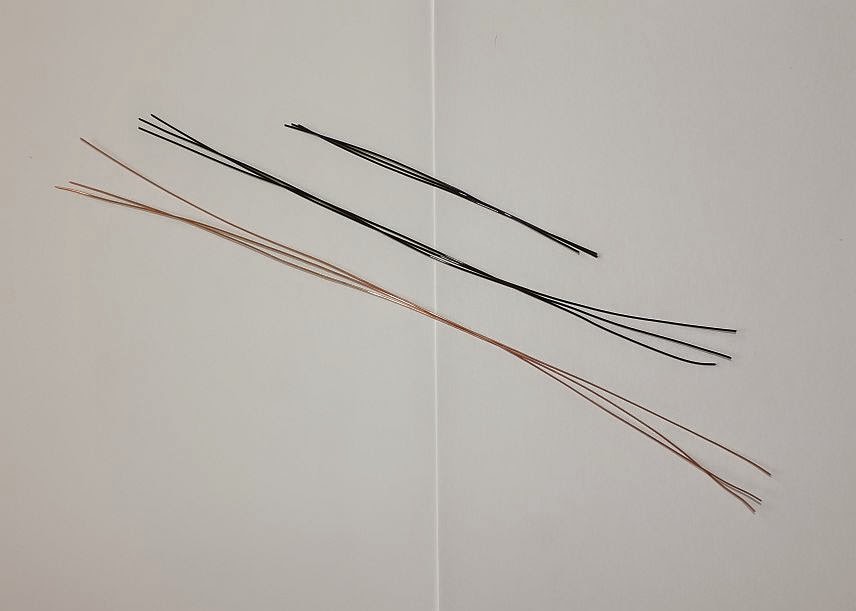 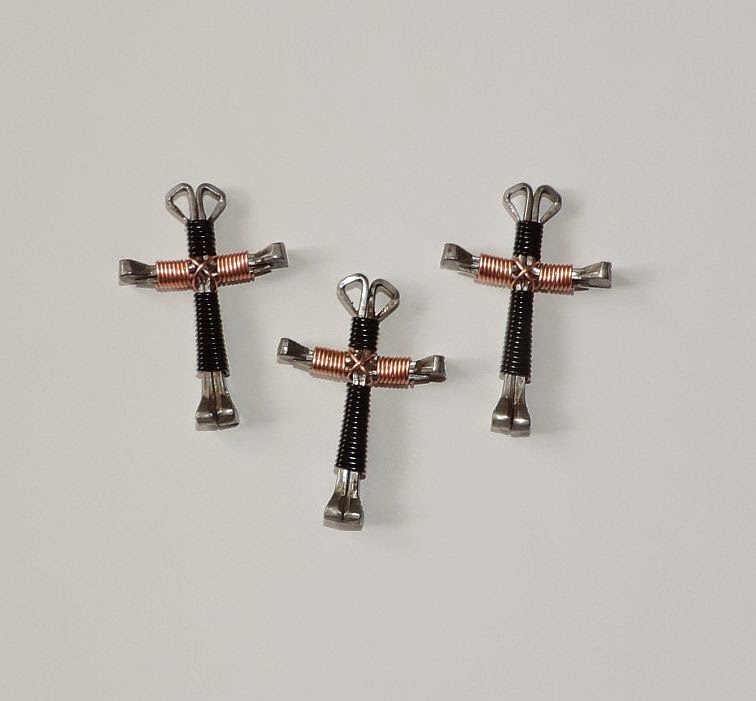 After wire wrapping, they will be clear coated to protect the wire and nails.  When dry (tomorrow), they'll be strung onto new necklace cords.  Finally, they will be ready to ship out!

I really like reusing as many craft supplies as I can and this is a neat way I've come up with to recycle some of my old cross necklaces into new ones.