I'm taking a break from posting about crafty things to talk about horse racing today...  Warning: It's quite a ramble... it took me a while to write and I'm sure it'll take a bit to read.

I saw my first horse race when I was 5 years old.  I still remember the bright colors the jockeys wore.  It was just at the fairgrounds, in small town Colorado, but I was hooked.  I decided then that I wanted to be a jockey.  I carried that dream until my early 20s, when I finally gave up.  It's hard to fight for a dream all by yourself.  My entire childhood and young adult life, whenever I told someone I wanted to be a jockey, they'd reply - without fail, "you'll be too tall/too heavy/you won't be strong enough."  Not one person encouraged me to go for it.  (As an aside, it is for that reason that I will NEVER crap on someone else's dreams.  I do my best to encourage anyone - especially children - to follow their dreams.)  I did work on a breeding farm and on a track when I was a kid.  Then life took some twists and turns and I made the decision to give up on what I'd wanted to be when I grew up, but I still think about it - a lot.

It hurt to give up and I actually turned away from following horse racing like I used to when I was younger.  I used to watch every race that was on TV, I knew all of the back stories of the horses and connections in the big races.  Then I stopped watching, it hurt too much.  I remember crying in the car after watching Seabiscuit in the movie theatre, because I had wanted to ride racehorses so badly for so long.  Throughout the years though, I've still made it a point to watch the Triple Crown races every year and usually the Breeder's Cup too.

Not since 1978 has there been a winner of the Triple Crown.  A few months later, I was born.  I grew up on stories of the Great horses and the Triple Crown winners of the past, but I had never seen one.  I had started watching races on TV in the late 80's and I saw almost every time a horse came close - winning the first two, but losing the Belmont.  Certain of those close calls were heartbreaking to me, for my own reasons.  Charismatic in 1999 - I wanted Chris Antley to win the Triple Crown so badly, he was a jockey that I had liked...  Smarty Jones in 2004 - by that time I had stopping following the horses and at the time I knew nothing about him, but... the last Triple Crown winner had been in 1978, the year I was born.  My daughter was born in 2004 and I thought it would be so cool if the next one was "for her".  It was not to be.

No others really stuck out for me, until last year.  I started hearing about California Chrome and his back story.  I watched the Derby, the Preakness...  By the time the Belmont came, I was a huge fan of his, I got caught up in the hype, he HAD to do it.  Jeff even got swept up in on the whole thing and we watched the Belmont live, together.  "Chrome" didn't make it into Triple Crown history.  I felt crushed, again.

This year, our life was going to bring major upheaval: Jeff had orders for us to move to Japan.  Before we left, we made several trips around the U.S., visiting family and friends.  I watched the Kentucky Derby on my phone, at a rest stop somewhere in Ohio, shortly after it ran.  I watched the Preakness on my laptop, in a hotel in South Dakota, shortly after it ran.  I'd heard murmurings of American Pharoah beginning last year, but didn't (and admittedly, still don't) really know much of anything about him.  All I knew was that, once again, a horse had a shot at the Triple Crown.

I started watching his workout videos, leading up to the Belmont - from my phone and laptop all over the U.S. and, once we made the flight over in late May, from Japan.  I thought, "wow, he's a nice horse."  I even told Jeff that I thought, just based on watching his workouts, that he might actually do it.  But truthfully, I didn't dare to hope and part of me wondered if another Triple Crown would ever happen again.  It might sound selfish, but I didn't want to cheer for him, because I didn't want to be disappointed again.

When the Belmont ran on Saturday evening, which was actually Sunday morning here, we were going to hit the road for our first ever little road trip here in Japan.  I knew I wouldn't be able to watch the Belmont.  (part of me wondered if I even wanted to)  I tried to find a way to stream the race live on my phone, but couldn't get anything to work.  We set out to our destination - a draft horse pull/race - and once we were there and I saw real, live, beautiful horses for the first time in a while (due to the move), I forgot about trying to watch the Belmont.

People sometimes ask about notable things, "where were you when X happened?"  In my case, where was I when I watched the 37-year Triple Crown drought come to an end?  Sitting in the market area of a draft horse event in  Shichinohe, Japan, watching a replay of the race on my Japanese cell phone.

It was during a lunch break/intermission that I finally remembered the Belmont.  I went to YouTube on my phone and searched for the race.  Unfortunately the outcome of the race was spoiled by the names of the videos, all declaring that he'd won.  Before even watching, I looked up at Jeff and said, "He did it." I was equal parts frustrated, sad, and awed.  We watched the video together, right there at a folding table, on folding chairs, surrounded by Japanese people, and draft horses and ponies.  When it was over, I had tears in my eyes.  Jeff didn't really understand.  He has gotten into some of the races with me - he loved Zenyatta and was as disappointed and heartbroken as I was after her last race.  But he didn't understand the whirlwind of emotions that I was swept up in immediately after watching American Pharoah's victory.

I struggle myself to explain the emotions I was feeling.  When (IF!) it happened again, I wanted to be watching.  That's why, though I have become an absentee fan of racing, I've made sure to watch the Triple Crown races every year.  I felt hurt that when it finally happened, I hadn't been watching.  I wanted to be a part of it, even if that was just watching it live, like I had done for so many Belmonts before.  I felt tears because, a horse finally did it.  The horse who I hadn't "followed" until starting to watch his workouts just a couple of weeks ago and feeling, in spite of myself, that he actually had a real chance.  I felt stunned and awed, this hadn't happened in my lifetime, how do you react to something like this?

Unfortunately, or perhaps fortunately, I didn't have much time to analyze things.  I didn't exactly want to break down crying where we were, so I pulled myself together and we went back to watching races of a different sort. 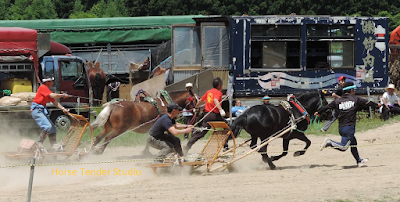 I'm thrilled for American Pharoah and his connections.  I'm thrilled for everyone who was there to see it and for those who cheered him on through their televisions.  I wish I could have been there or done that, right now it really does hurt that I missed it.  But I know that Jeff and I are having a once in a lifetime experience right here, right now.  So instead of feeling sad for all of the "what might have been", I'm going to pick myself up and start the arduous task of going through the 897 pictures and videos that I took yesterday!  (and recovering from a sunburn)