Behind the Craft: Tatting

It dawned on me recently that, while I've mentioned tatting a few times here - and showed a couple of in progress pieces - I've never actually done a post about tatting - or showed any finished work.  It's also been a long time since I've done a Behind the Craft post, they are fun to do.  So, here we go!


I first became aware of tatting as a little kid.  My Granny tatted and I remember many a night spent watching TV with Granny and Granddad, hearing the *click-click* of her tatting shuttle as she worked on something.  She entered many things in the county fair and brought home many ribbons and rosettes.

When I was pregnant, she sent me a tatted baby bonnet and booties.  I still have them.

At some point, several years ago, I thought that it would be neat to have Granny teach me tatting.  I had talked to Jeff about it a few times.  I thought I would need to go and stay with Granny for a couple of weeks to learn.  That didn't happen, but I really wanted to learn and felt more and more like it was something I had to do, to carry on the tradition for our family.  No one else, such as my mom or my aunt, had ever learned it.

Three years ago, Jeff and I made a trip from South Dakota to Arizona to see Granny for Thanksgiving. 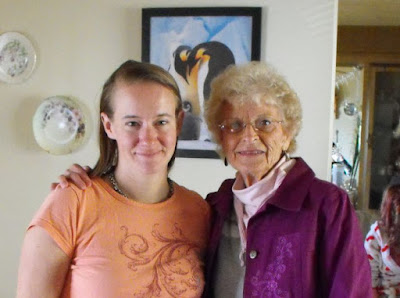 Spontaneously, I think on the last night of our visit, I asked Granny if she could show me a little bit about how to tat.

We sat down for about 20 minutes before bed that night and we ended up having an audience.  My uncle Mark, who is the historian of the family took pictures I think (he is always taking pictures), but I don't have them.

Granny explained how tatting is just rings and chains, that's all there is to it.  She showed me how to do the double stitch, how to make a ring and how to make a chain.  When we left, she sent me with two of her tatting books, a ball of thread, and a tatting shuttle.  She told me to practice making rings and chains, until I could do them well, and then make something simple, like a bookmark.

Well, I did just that!  As soon as we returned home, I started making rings, rings, rings, chains, chains, then I set out to decipher a pattern and made a bookmark.  (I gave Granny my first bookmark for Christmas the next year). 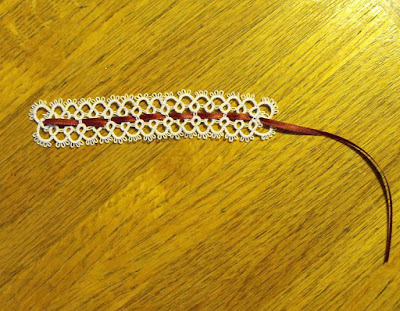 Afterwards I made another one and another, then my first doily.  I was off and running!

I think it was shortly after, Granny called me and said she was sending me a box of tatting thread and boy, did she!  I received a box stuffed with tatting thread, both the larger crochet thread (size 20-30) and actual tatting thread (size 80).  Tatting thread is so fine, it is like lightweight sewing thread.  I've only made a few things with it, but they are so tiny and delicate.  I can really see how tatting is often referred to as a type of lace.  As Granny explained it to me, tatting itself is just a technique; you can "tat" anything - thread, rope, leather cord, yarn, etc.  She uses mostly the crochet thread (20-30).

So I had my very first tatting lesson in late November 2013.  In late 2013, I decided that I wanted to further follow in Granny's footsteps and make something for our fair in SD.  In the box of thread, she'd also sent a bunch of patterns.  One that caught my eye was for a Barbie wedding dress. 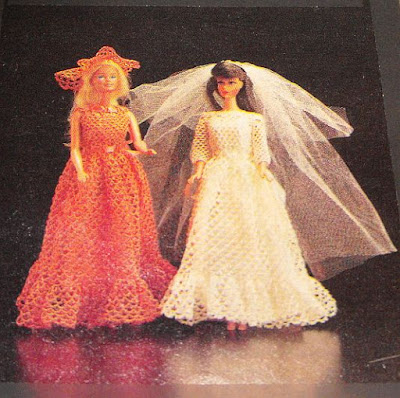 She had noted on some of the patterns which one she'd entered in the county fair in Colorado and how they had done.  On the dress pattern, it said she'd won 1st place. I decided to go for it.

I started the dress in late December and the fair was in August.  I finished it just in time and, very nervously, entered my first fair. 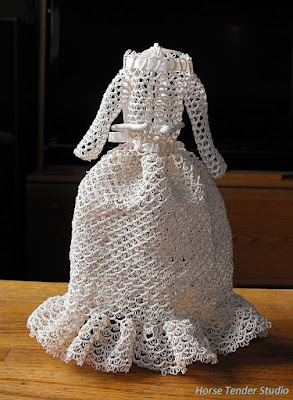 The day the exhibits went up on display, with the results of the judging, I almost couldn't bear to go see how I'd done.  When I did see, I was shocked: I won first place! 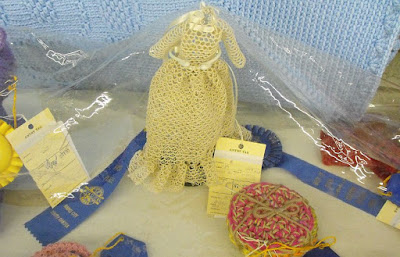 Also there was a large rosette near the dress with "Best of Show" on it, but I couldn't be sure if the rosette went with my tatted dress or a crocheted item next to it.  I realized after looked at other divisions that each one had a sign listing the Best of Show, Judge's Choice and so on.  I went back and there it was. 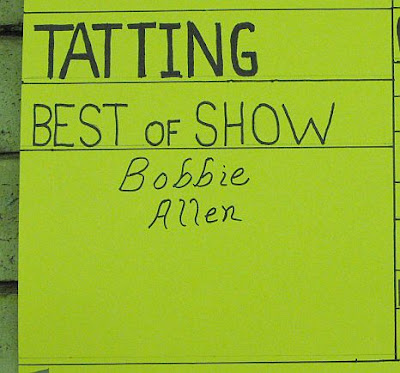 I immediately called Granny and told her the news.  She was SO excited!

The next year, I had to enter the fair again, but March came and I still hadn't started on anything.  After talking it oer with Granny, I decided to do another pattern of something she'd made that won her a first place, an American flag.  Once again, I finished it just in time (seems to be a trend) and once again I was all nerves entering, and awaiting the results. 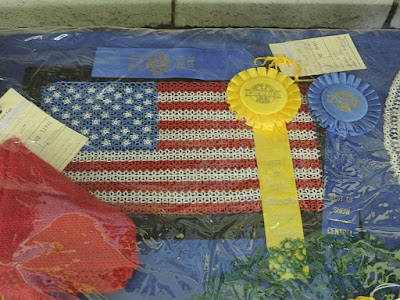 This time, in addition to first place, Best of Show, I also won a Best in Class rosette! 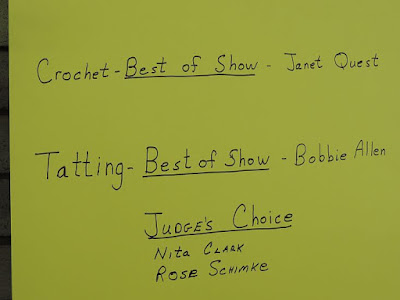 It was made even sweeter, because Jeff was there with me the second time.  The first year I'd entered with the dress, he'd been deployed to Afghanistan.  But the year of the flag, he was there with me when I went to see the results of the judging.

Fired up and wondering if I could possibly pull off a three-peat, I started work on my next planned fair entry right away.  It was yet another prize winner for Granny.  It is a large red doily in the shape of a heart with an arrow through it.  It was well underway when, in mid November, we got the news that we would be moving to Japan in May of 2015.  No more fair for me.

I stopped tatting for quite a while and months went by before we arrived in Japan and started to get settled.  I found a craft group here and during one of their get togethers I brought some tatting supplies and started making bookmarks and bracelets again. 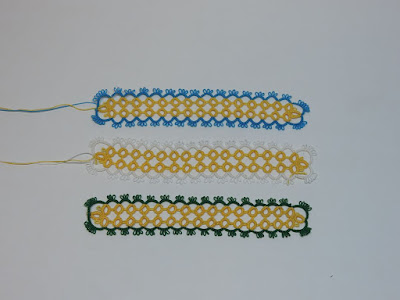 I did make several tatted ornaments for the vendor show this past Saturday.  I did a quick preview of the tree and wreath in an earlier post.  Here's how they look when finished: 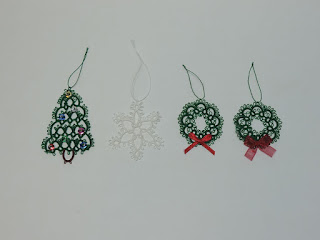 I still have the started heart and arrow doily and I'd like to finish it while we are here.  I might also work on a couple of other, larger tatting items here.  Maybe I can enter a fair when we get back to the States, or maybe I'll find something to enter it in here.  As it turns out, tatting is actually done here in Japan too; I've even found two Japanese tatting books at a local craft store!

I've heard many people, including Granny, say that tatting is a lost art.  Thanks to the Internet, I see that there are many people who still tat, but it's rare that I encounter someone face to face who has heard of it, and much more rare that someone knows how to do it.

One last note...  There are different types of tatting, two that I'm aware of: shuttle tatting and needle tatting.  I use a shuttle.  There are shuttles that have a bobbin in the middle, I imagine they are quicker to load thread onto, but I use the type that click.  Each end of the shuttle joins in a point and they click back together when thread passes through the point.  Using that type is a sentimental thing for me, after growing up hearing the *click-click* of Granny's shuttle as she worked.

I'm sure I'll be sharing more about tatting in the future; I'm currently finishing up a Secret Santa gift for a fellow crafter.  (I'll show pictures after I give it to her).  Plus I have some ideas of more things to make for the next vendor show.

Now, if only I could figure out a way to use tatting to make something for model horses...  Any ideas?
Posted by Horse Tender at 4:41 AM

Labels: Series - Behind the craft, tatting