For a while now I've kept my paint on a lazy susan style holder.  I've been thinking of trying something else though, because it takes up a lot of room on my perpetually crowded desk.  It also ends up being just another place that I pile stuff when things get messy... 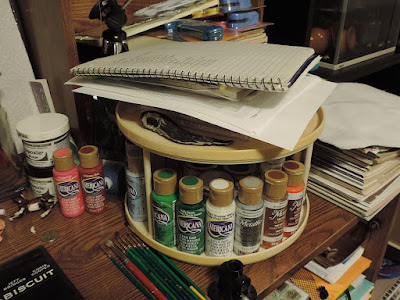 I've seen a lot of neat ideas for storing/displaying craft paint - particularly over on Pinterest.

When we were unpacking our household stuff here, we came across our spice rack and Jeff decided to throw it out.  All of the spices on it were old, so they were thrown away.  However, I laid claim to the wooden spice rack, thinking it would make a perfect paint holder. 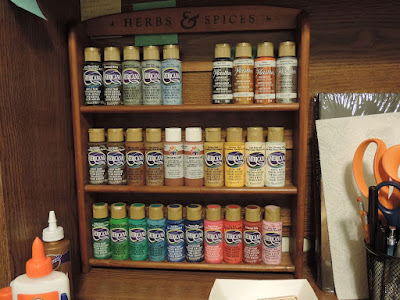 It's been kicking around for a while, but last night I decided to finally put it into use.

My original idea for it was to hang it on the wall, just to the left of my desk. 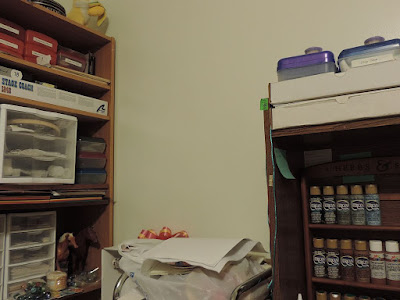 However, I think I like it just were it is, tucked in on my desk.  It doesn't take up much room (certainly much less than the lazy susan) and this way my paints will be right in front of me when I'm sitting there.

I had also originally thought about painting it, but it matches my desk just the way it is, and who cares if my paint rack says "Herbs & Spices"...  ;)

In other studio room news, I'm going to be getting another DVD shelf, to use as a ribbon holder.  (the first one I bought is serving as a rubber stamp holder)  The cardboard box ribbon holder that I made is turning out to be rather flimsy and I think a proper shelf would be much better.

I'm slooowly getting the room squared away so hopefully I can MAKE more things in there.