The vendor show was day before yesterday.  Preparations were... spotty and as a result I was fairly frantic the day before, and in full out freak out mode the morning of.

Longer story short, I did make it to the show and got everything set up.  The setup was helped along by the arrival of some friends who found me with random things strewn across the table and 1/2 hour until the doors opened.  (they had also brought me breakfast and coffee - which was awe-some)

Here's how the table ended up looking: 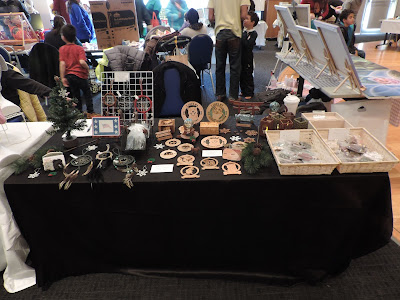 I had it mostly divided up in the two businesses.  One side was for Horse Tender Studio - my crafts.  Primarily what I had available were: dream catchers, cross necklaces and charms, some of the tatted ornaments, and greeting cards. 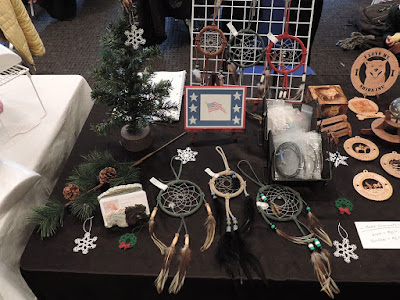 The other side of the table was for Cut By Light - the laser products.  I had out some ornaments, desktop plaques, candle holders, float holders, and a bunch of laser cut craft supplies. 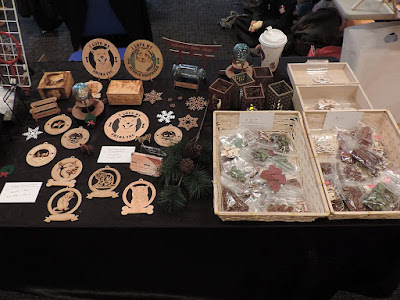 I had wanted to go for a bit of a festive/seasonal look so I'd found the artificial pine picks and the cute miniature tree at the (fantastic) 100 yen store.  I had also found the bamboo baskets, wooden easels, and acrylic business card holder there  I think the table ended up looking pretty good.

The show went well; I sold some things, took a few custom orders, and talked to several people about possible future orders.  On the crafting side of things, I was surprised that the most popular item I had there were my dream catchers!  I sold several of them and everyone who saw them was excited about it.  "Oh look, dream catchers!"  Kinda makes me wish I hadn't left the majority of my dream catcher making supplies back in the States - haha.

Now I'm in recovery mode after the stress of getting ready, getting there, and being in "meet the people"/business mode for several hours.  I dare say I feel like I've become a bit of a hermit here so far.  This was my first public event here and the first vendor event since the Stock Show back in January.  I was very nervous about it, but I had fun and am already looking forward to the next one.

This morning we woke up to this: 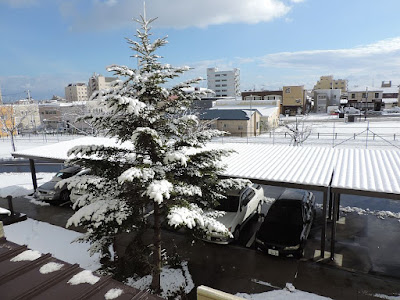 We've had a couple of small snowfalls, but this was the prettiest morning so far.  I'm so excited that the snow has arrived!