Dealing with my (ever growing) floss hoard- er, "collection" haha - has been an ongoing thing and subject of a handful of posts here already.

Last summer, I launched into making my own bobbins and storing my floss in plastic "bead boxes", or so I call them.  I had seen that's how my Granny keeps hers, and thought it was an awesome idea!

So that's how I've kept most of it, save for colors that I have a lot of, which have been stored in their original packaging, for multipacks, 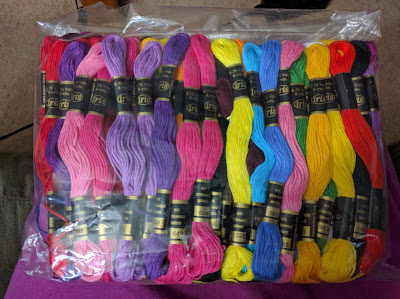 or in plastic pencil boxes, for the loose skeins.  As I used up a bobbin, I'd find another skein of that color, if I had one, and wind it on.

That system was working okay, until...

The Great Floss Acquisition of 2016, as it shall forever be known.  I added 935 skeins (in 250 colors) to the collection.  I wasn't quite sure how I was going to store them, but started by winding one of each color onto my recycled bobbins and integrating them into the bead box system.  However, that still left me with several hundred skeins that were homeless.  I had sorted them into color groups, crammed into my pencil boxes and left it at that.

First, after wondering if it was necessary - and finally deciding that it is - I started an inventory spreadsheet.  Until recently, I've done everything by color, the numbers on each skein don't mean much to me.  But I've been following some patterns lately (for things other than saddle pads designed in my brain)  and for those projects, the numbers ARE important.  I've had a couple of time consuming, frustrating sessions of digging through everything to see if I even have such and such number.  You'd think I'd have everything by now, but I don't!  I'm making due by using similar colors/numbers for the ones I'm missing and so far that's been fine.  I'm NOT looking to buy any more of this stuff for a good while.

An odd collection of random pencil boxes, crammed with floss, isn't a very useful solution.  And it would make doing inventory a nightmare (so far I've only inventoried my floss on bobbins).  So, a few days ago I was searching Pinterest (good ol' Pinterest..) for some ideas on how to deal with my backstock.

I settled on using this tutorial for inspiration and decided to give it a whirl.

The last few days I've been bagging the backstock skeins into snack bags, by number, or grouped with sequential numbers if I only have a couple of each, like 403 and 404 below. 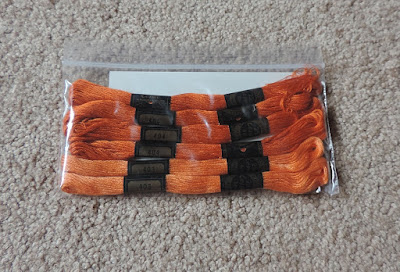 Each has an index card, which I may write some information on later, or I might not, depending on how crazy I want to get with all of this.  They are mainly there to help keep a shape to the bag and not let things get all smooshed. 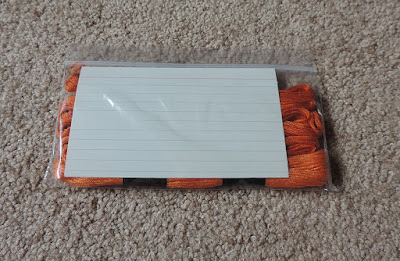 I quickly filled two plastic shoe boxes (all I had available) and..  I estimate I'm maybe only half way through.  Hmmm. 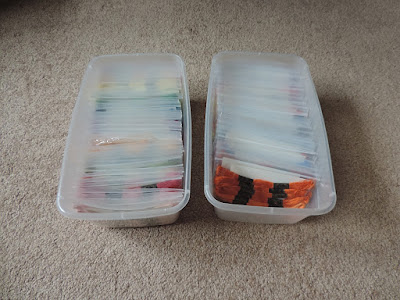 This morning, I went to the BX (base exchange) to check out their plastic shoe boxes.  They are a different design that the old ones I have, which vexed me, but I thought they were the only solution.  Unfortunately, they are even more tapered at the bottom and my snack floss bags won't even fit in them without significant smooshing (I took a bag of floss with me for size checking).

Next to the shoe boxes were these, the next largest size of plastic storage box. 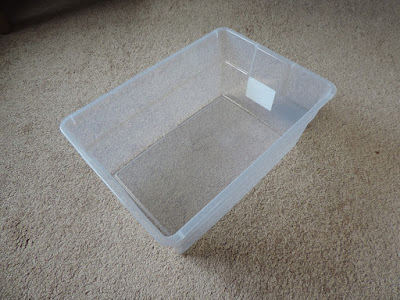 Test bag indicated that they were way too big.  Sure, they'd fit in there, but a massive waste of space inside.  What to do? 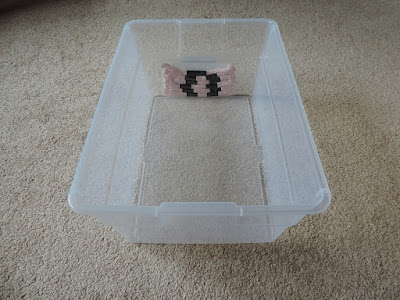 It dawned on me to try standing them up.  Yes, that would work!  I can get two rows in each box with room for a divider and room to put the lid on.  Perfect! 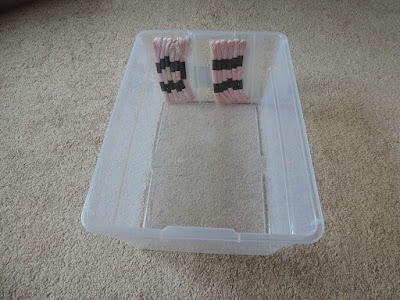 So I bought two of these and I HOPE that alllll of the rest of the floss hoard will fit into them.  I also bought a roll of contact paper to line the bottoms, as per the tutorial.  I'm going to use some cardboard to make a divider.  Things might get fiddly until I get the boxes loaded - I don't want to permanently attach the divider I don't think.  But once the boxes are full, it should sit in there just fine between the rows I think. 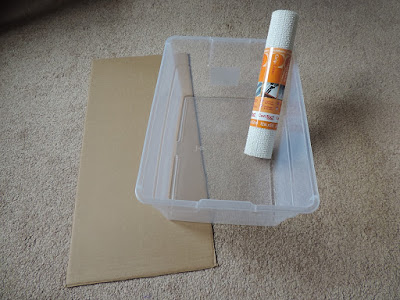 The plan is to have additional dividers in the rows, by brand, and I'm thinking by number groups (100s, 200s, etc.) for the main batch -  which is Cosmo, a Japanese floss brand.

After everything is bagged by number, I'll add them into my inventory spreadsheet and then I should be good to go!

It may seem like a lot of work to get all of this sorted in such a way, but I think it will be well worth it when I don't have to spend so much time digging around to find such and such color and then determine how much of it that I have if working on a large project.