Out of the Woods

Painting horses doesn't come as easy to me as it used to.

Wait, perhaps I should rephrase that...

I think the actual act of painting comes (fairly) easy and I enjoy it - greatly - but it's the getting started that does not come easily anymore.  I really am my own worst enemy, in a lot of ways and for a lot of reasons.

Going way back to my very first attendance at a live show, I think I've had a tendency to work on custom horses for my show string at the last minute.  I remember doing just that on the eve of shows before my long "hobby hiatus".  Even upon returning to the scene, before my first comeback show, I finished some new horses.  I kept up the tradition, finishing up five horses in the motel room the night before my last show (before the big move).

With the move, I thought my live show days were over, or on hold- again.  However, I decided to do something possibly a little crazy and consider proxy showing - from Japan.  It should be no surprise that my initial cut of custom horses to send consisted of several unfinished and even unstarted horses.

After confirming with a friend that she would be willing to show for me, I spent about a week and a half beating myself up and procrastinating working on any horses, or even getting my entry together.

Then, the day before they HAD to be put in the mail or not go (thanks to our rapidly approaching Tokyo vacation), I finally sat down and painted three horses.

One of the three that I painted was an HA Misty Dawn resin.  This is a resin I'd fallen in love with many, many years ago, after seeing one that a friend had.  There was just something about her.  A few years or so ago I was randomly able to buy one.  She had then sat, prepped and primed, for all this time.  I could never decide what color to make her.  Then came crunch time.

She made the final cut to be sent to The Jennifer Show and I had to decide on a color.  Back in the day, one of my "signature" colors was black chestnut.  It was a color I enjoyed doing and I had sold every one that I'd done.  This little resin isn't going anywhere though and I thought maybe I should do a black chestnut for myself.  It would be the first time I'd tried to paint one that color in 12 years or more.  Could I still do it?

Sometimes there are moments when things just work.

I like to listen to music while I work, occasionally TV/movies, but mostly music.  Since we moved here, I've been doing a lot of YouTube playlists on my phone, since I can't get a good radio station here.

As I was putting the second coat of body color on the little resin, a Taylor Swift song came on.  It is called "Out of the Woods".  To the driving beat, I realized that this paint job was working.  It was already looking really good.  I was having fun.  I love doing this!

When all three horses were done, it was time to name them (that could be a post on it's own), but I realized that my little resin already had a name.

I added her to my horse list with the name: Out of the Woods.  I think her barn name should be "Taylor"...

Here is a quick picture that I took, before shipping her to Colorado.  Hopefully I'll be able to get better pictures after she comes back home. 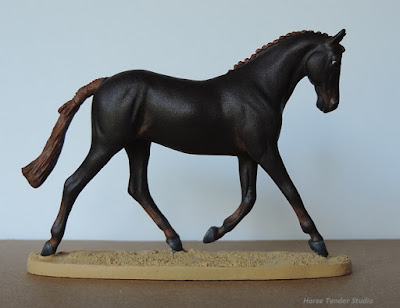 There is a bit of a post script to this story.  Back when I was teetering on the idea of a return to the model horse hobby/world, I first heard "Shake It Off" - another Taylor Swift song.  Maybe it's odd, but the song, and video, became a bit of an anthem to me.  As far as the idea that you should do what you love - no matter if you are "good" at it, or people "approve", or not.  Sometimes it seems like it is cool to hate Taylor Swift and, I admit, I used to not be a fan, but I'm a convert.  I love how she was goofy and silly and just having fun in that video.  I enjoy her music and I now have two of her songs to thank for being bright spots in the darkness.  Thanks, Taylor.