Back when we first got to Japan, we went on a Newcomer's Tour.  One of the stops was at a Shinto Shrine and it was there that I learned about the Hachinohe horse.  Since then, we've seen little (and big) versions of Hachinoe horses all over the place.  I knew at some point I'd have to get some of them for my horse-shaped-object collection -  just because.

Well, a friend here stopped by yesterday and delivered two of them that she bought for me at a thrift store!  I'm not even sure she knew that I wanted any of them specifically, but she knows I like horses and said she's always on the lookout for "horse things" now.

Here are the latest members of my Japanese horse herd: 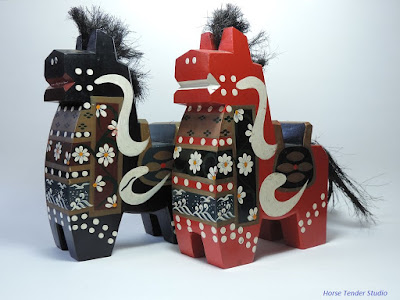 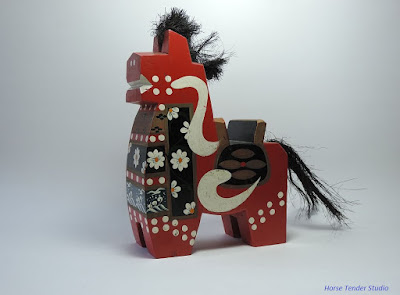 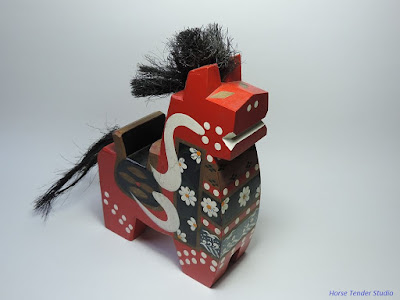 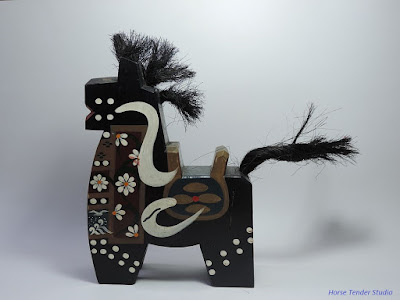 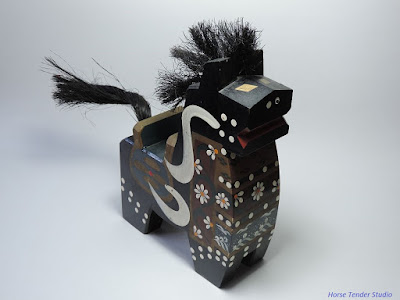 They are heavy, carved from solid chunks of wood.  They could both use some TLC: a bath and possibly some help in the mane and tail department.  I thought about trying to redo their 'do, but I'm torn about that.  I'd like to keep them original, but it would be nice to try and restore them too.  The black one is not too bad - except his tail doesn't stand up anymore, but the red one is in pretty rough shape.  They are both "shedding" like crazy, leaving bits of black "hair" everywhere.  For now I'll most likely leave them alone, since I have SO many other projects going on, but at some point maybe I'll try to fix them up.

Oh, also, at some point during out early travels here, we found a local store that sells blank Hachinoe horses for a person to paint and finish themselves.  Of course that peaked my interest and I figure at some point, while we're here, it's something I should try.  ;)