I Rode A Horse - The Story

Yesterday, I rode a horse.

It started out with Jeff and I hearing that there would be a horse archery competition over the weekend.  (more on that in a future post!) 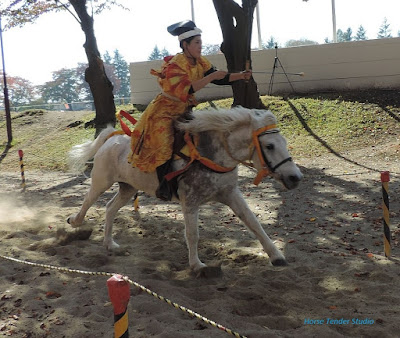 In addition to the horse archery, there was an arena set up in the middle of the park where some demonstrations were going on.  The first day, we had gotten there late and didn't get to see much except a couple of people riding around in the arena.

On Sunday we got there early and saw that there was a jumping competition going on. 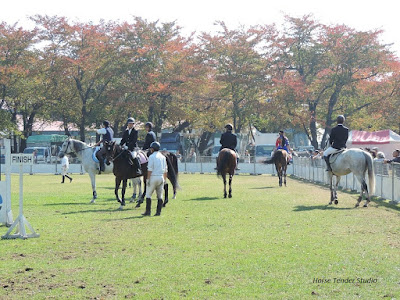 I told Jeff that seeing these horses was really hard for me, because I missed riding so much.  Especially seeing things like the archery and this, English riding - which I had been getting more into over the past couple of years.  So far we've seen draft horse and pony pulls, a ceremonial parade with draft horses, and "wild" draft horses here in Japan.  That has all been wonderful, but this weekend was the first time I'd really seen people riding - doing the things I used to do before we came here, and... it hurt to watch it.  I started crying as we talked about it.

I tried to pull myself together and took some pictures at the end of the row of jumps. 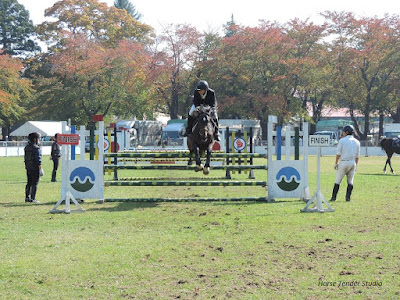 After each of the horses went through, we noticed that they raised the jumps.  We moved around to the long side of the arena so that I could get some side shots of them jumping. 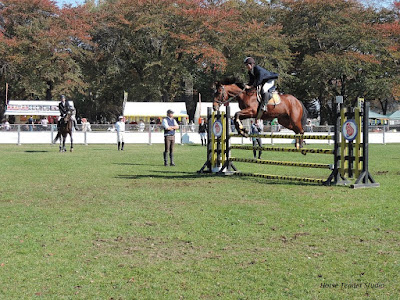 A pat for a job well done.  This horse was very pretty. 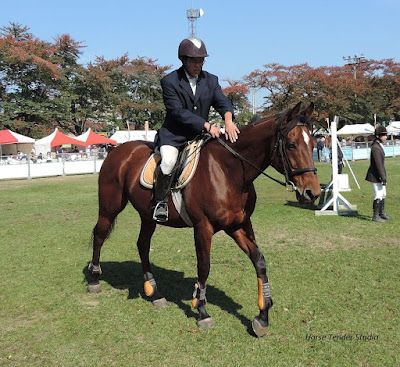 After the jumping was done, they did a victory gallop where the top three horses went around the arena twice. 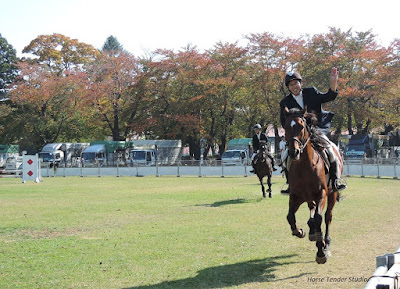 Immediately afterwards, a woman in the arena with a microphone approached us and tried talking to us.  I felt bad, I had no idea what she was saying or what was happening.  There was a huge crowd there and I was feeling embarrassed, trying to figure out what was going on.  We figured out that she was asking me to come into the arena.  Without hesitation, I took off the camera and camera bag, handed them to Jeff, and headed in.  I had NO idea what was going to happen, but if I could get closer to the horses, I was going to go for it.

On the way over, she asked my name and held out the microphone "Bobbie," I said, then immediately corrected myself, "Bow-bee".  That's how my name is pronounced here.  She said "Ahhh, Bobbie-san!" and went on chattering into the microphone for the crowd.  I was still so confused, but we walked right over to one of the horses. 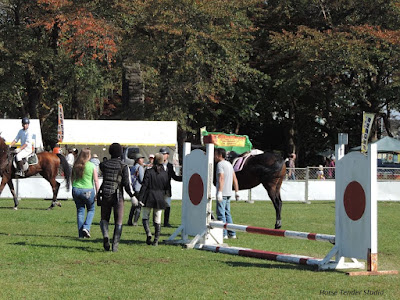 There was some talking among the riders gathered around and someone handed me a helmet!  I put it on.  Then they handed me a pair of gloves and I put those on too. 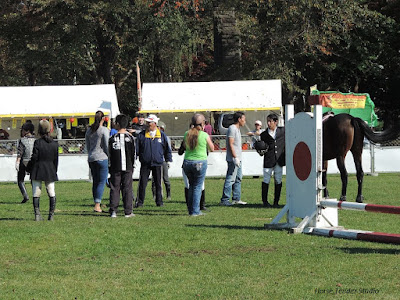 Next someone put down a mounting block and an older man was motioning to the mounting block, then pointing at my foot, and the stirrup.  Oh yeah, I got this! 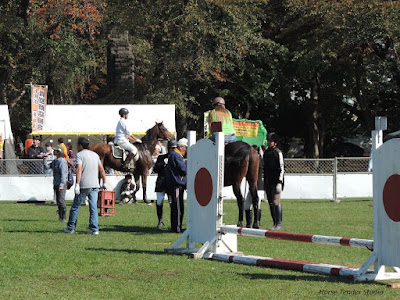 I was fully prepared to be led around on a "pony ride" but I didn't even care.  I was on a horse!!!  They adjusted my stirrups (waaay down from where they had been).  I noticed they'd brought another woman out and had her on a horse too.  She looked excited, but nervous.

I'd gotten myself sort of situated in the (small) saddle and started to gather the reins.  Someone on the ground asked me, "Have you been on a horse?"  I leaned forward, nodded, and replied, "I have a horse." 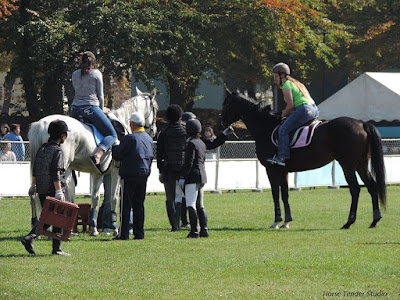 They were excited by this and passed on the news.  The next thing I knew, the person holding the horse, let go and they motioned for me to ride away.  Really?? 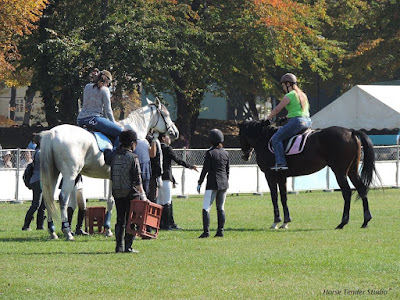 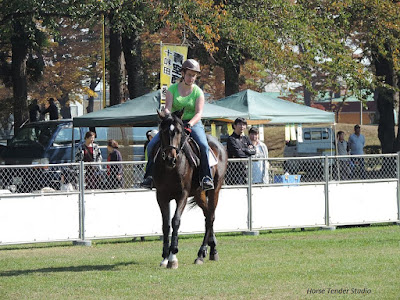 I rode around at a walk for a little bit.  I thought it would be a lot of fun to try a trot, but I didn't want to take off on someone else's horse.  However, as I approached the woman who'd brought me into the arena, she said to me, "Gallop, please, gallop." 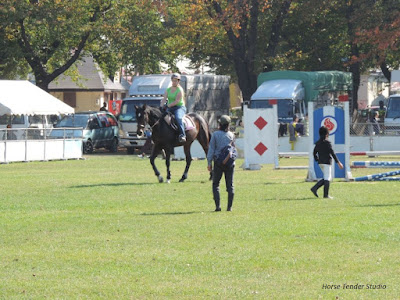 I laughed and said, "I don't know about that!" and she laughed too.  But I started trotting right away, all smiles now. 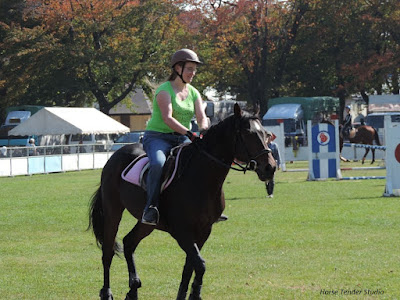 Jeff took lots of pictures and even some video! 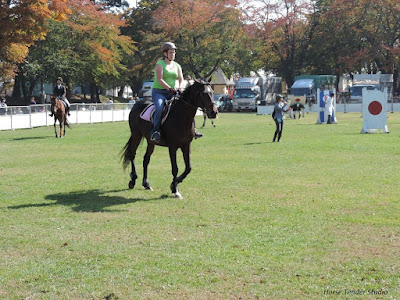 I rode over to Jeff at one point and told him how she had asked me to gallop.  He said, "Do it!  Just take off.  Wow the crowd!"  I laughed.

I didn't take off at a full gallop, but I did get into a canter and we did a couple of passes by the main crowd.  This was the only picture of the cantering. 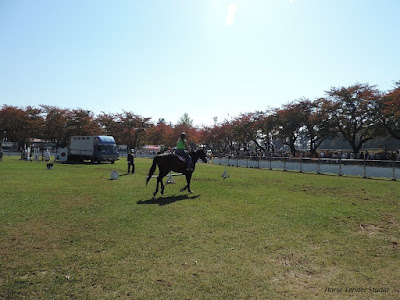 He was such a good horse.  Very well trained.  I was in heaven. 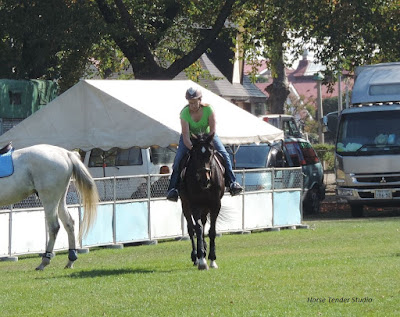 I still couldn't believe this was happening and I was trying to soak in every moment.. 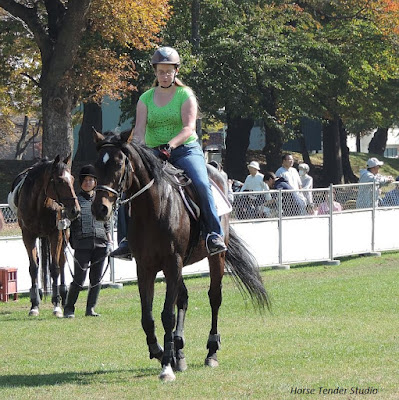 The woman who had brought me into the arena got my attention and told me it was time to stop.  I laughed as I got ready to turn toward her.  I could have ridden for hours. 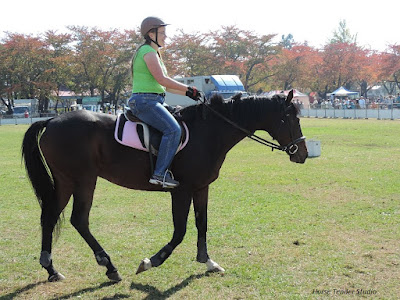 She held him while I hopped off.  Once I was back on the ground, I asked her if I could give her a hug.  She laughed and we hugged each other.  She then asked me to come and meet the President of the riding club.

She took me by the hand and ran me over to an older man by the truck that they had been loading the jumps into.  They talked and I ended up getting a business card for the club.  I knew there was a riding club here, but I hadn't tried to find it or make contact with them yet.  I guess I have now!

I had a bit of a conversation with her, after she gave m the card.  She asked me about my horse, in America?  I told her yes, he is back there.  She asked, "Pony?" and I said, "Horse." and held my hand up about where Bo's back is.  She said, "Ah, Saddlebred?"  I thought that was interesting.  I wasn't sure if she meant the breed itself or if she was asking if he was a riding horse.  I told her that he is a "Paint".  I was't sure if that's a breed they are familiar with here, but she seemed to recognize the term after thinking about it.  I pulled out my phone and showed her the quickest picture I could think to find - my Facebook profile picture. 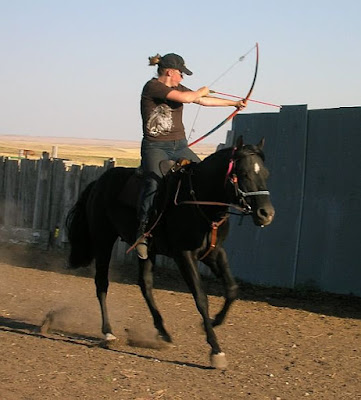 It was an absolutely amazing experience.  It wasn't until later in the day that I realized just how much I had needed that time on a horse.  I felt like a big black cloud that has been following me around had lifted away.  I felt like I'd been carrying around a ton of bricks and they were gone now.  I felt like I could do anything.

I want to try and make contact with the riding club soon, hopefully this week.