In Progress - Back to Natural - Chapter One

Back in November of last year, I wrote a post about a dilemma I was having concerning a "big lick" custom model I'd made a long time ago.  I decided that I would redo him, again, this time into a natural running walk.  I also mentioned in a reply to a comment that I had a Breyer Midnight Sun body who came in a batch of bodies I'd bought and that my plan was to eventually remake him into a naturally gaited Tennessee Walking Horse as well.

A few months or so ago, I learned of a page on Facebook called Hobby Heroes The Sound TWH Challenge.  Their idea is to have people remake Midnight Sun into a sound, flat shod TWH.  The models will then be auctioned off, with the proceeds going to Friends of Sound Horses (FOSH).  I thought it sounded like a wonderful idea, to take my plans for the Midnight Sun that I have and use it for a good cause.

Then came the big move and all of that.  I've been wanting to start on this project for a little while now, but I had two problems.  I wasn't sure I had enough Apoxie Sculpt to do that much work and my faithful Dremel seemed to be ailing.  I got in more Apoxie a few days ago and last night I finally had Jeff check out the dremel.  He said he thinks it's fine.  I'm hearing a clattering noise inside that I'm not used to, but we are thinking it's just the difference in electricity here.  According to the specs on the litle beast, it can run on what we have here, but it sounds different to me.

Anyhow, those problems solved, this is the short version of what I did today. 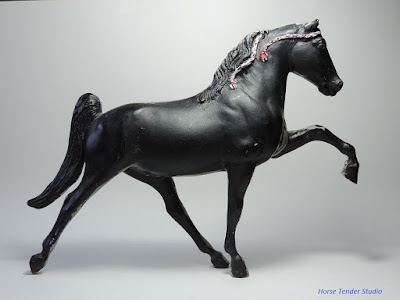 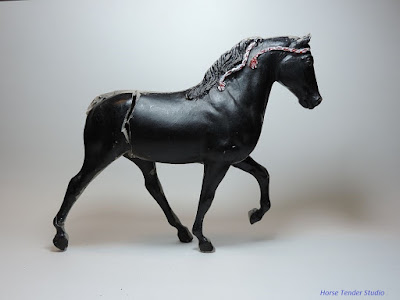 I documented the whole process, just in case I wanted to share it somewhere, sometime, but I figured for right now I'd just post the before and after pictures from today's efforts.

There is obviously still a TON of work to do.

Aside from his legs not being quite where I want them yet, he looks off to me somehow.  Maybe it's because his tail is gone, but his front end looks HUGE to me.  Maybe it's just more obvious now, without his front leg flung out into orbit.

Truth be told, I'm not very happy at all with how he looks right now, but I had to stop for the day.  It was a long slog today to get this far and I finally decided it was time to call it a day.  Despite all of that, it was fun to be working on a horse again, even if I am woefully out of practice.