I spent at least a few hours in the studio yesterday, doing fun horsey stuff!

After reading a motivating article, I was inspired to finally get started on a big, scary- terrifying - project.  It will involve a LOT of epoxy.

I think this may be the first time I've mixed a ball this big (the next one I did was even bigger).  I've almost always worked on minis... 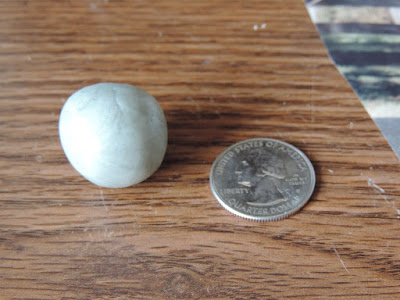 Here is the project.  He was constructed from scratch to this point during my day in the studio with Candace Liddy, back in March.  And this is how he has been ever since.  (with the addition of a few small globs of epoxy around his tail. 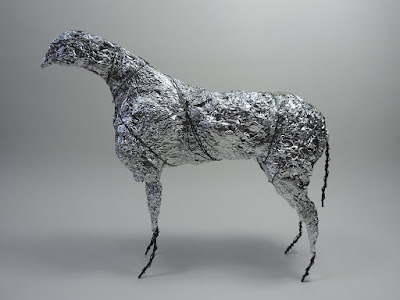 I had thought I'd just use him as an epoxy dump, since I was feeling intimidated to do much more than that.  Yesterday I decided it was time to get serious.

Here's how he looked at the end of the session.  I'm taking her advice and starting with the outline, to match my reference picture.   So he now has the beginnings of a topline, neck, chest, points of shoulders, and belly. 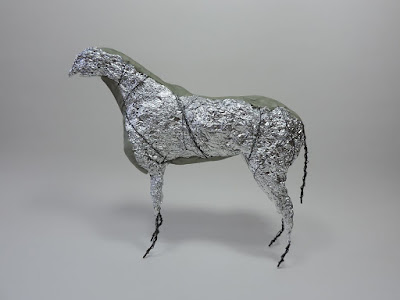 I had thought he was classic scale, but it turns out he is bigger than that.  Large classic or small traditional?  He is modeled after a Thoroughbred stallion, so I might be able to call him a large classic?  I'm not sure, there's plenty of time to decide all of that later on.  There is obviously still a ridiculous amount of work to do on him.

Stunt double horse seems to be saying, "What the heck is that??!" 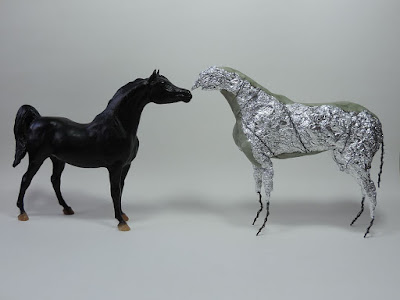 Inspired by my post on the state of the gift shop Pegasus figures, I decided to make some solid plans for their wings.

I have a bunch of these french fry cups, maybe they are called..?  I've used them mainly for paint mixing, but yesterday I discovered they make perfect small project parts holders.

This little guy will be running, just before take off. 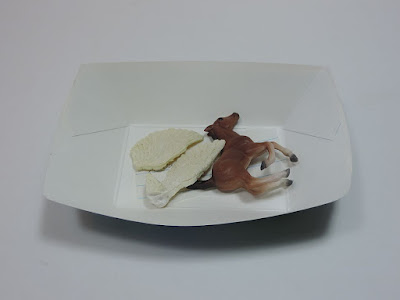 And this foal will be standing, stretching, I think. 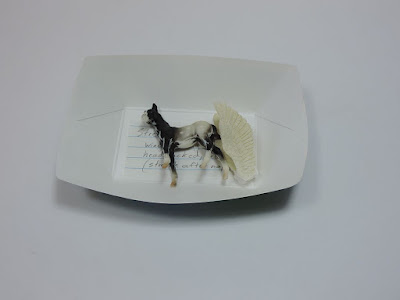 I've got some bad news, bat. 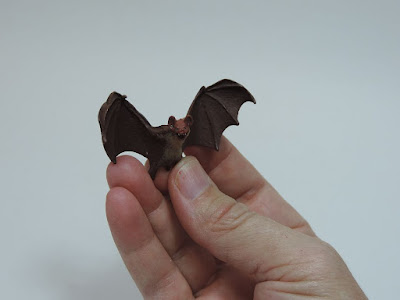 Here's all 3 baby Pegasus to be.  Including future bat foal (who kinda looks like he's being eaten by the bat at the moment). 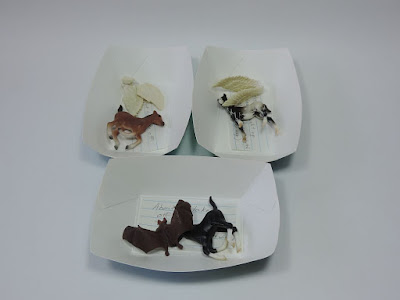 Another set of wings that I've acquired here came in a bagged figurine from my favorite figurine store, where I've been finding the horses, donkeys, and puppies. 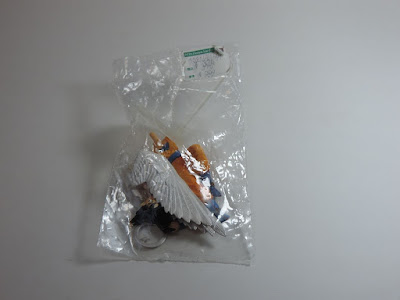 The contents of the bag. 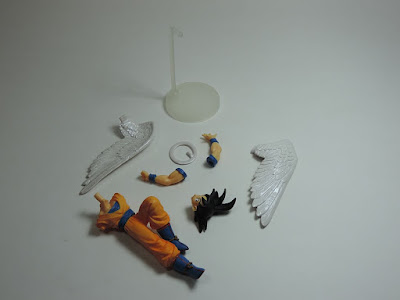 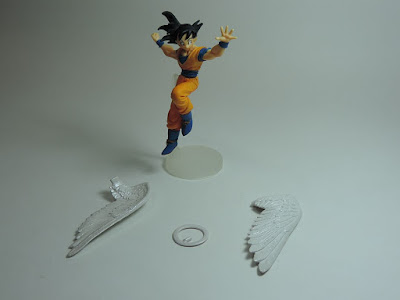 Of course, I bought him for his wings, which - luckily for him - didn't have to be hacked off. 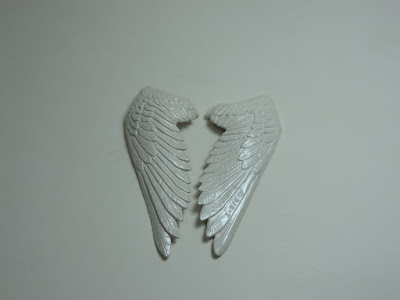 They are so pretty! 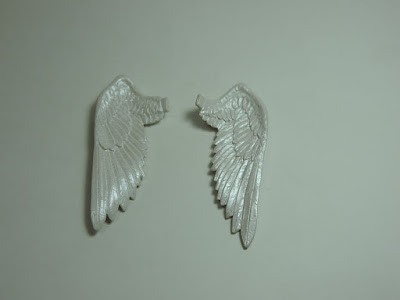 But what about the dashing dude that came with them?  Could I use him with a horse somehow? 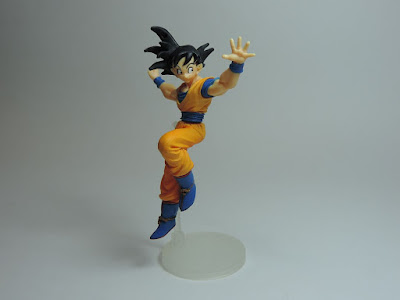 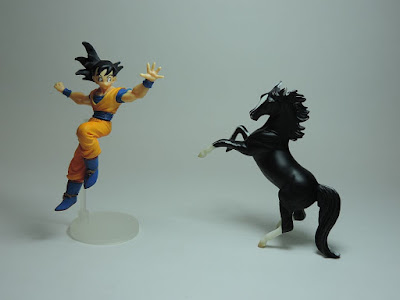 I thought about doing some work on him to make him into a prop person - and yes, I will probably do that.  He appears to be too big for SM scale, but he might work for LB.  My LBs are still packed away, so for now I've stowed him away in my "doll drawer".

What about his wings?  Well, I'm having a bit of trouble deciding. 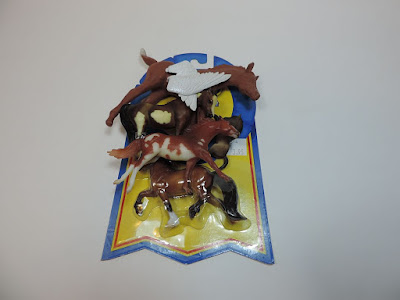 So far I have 5 candidates for the pretty, pearly wings.  I may even do a poll on here or on Facebook, that sounds like fun. 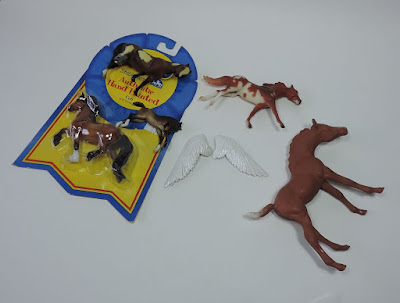 Also, I did a first painting session on an ornament horse, bringing the current herd to two.  I think the blue pony with have painted snowflakes and the red Morgan will have peppermint/candy cane stripes. 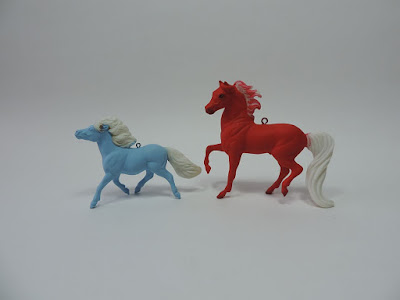 I did a bit of dremel work on two other Morgans who will most likely join the ornament herd.  They're both hair prepped now and I have some fun ideas for their holiday manes and tails.  One needs a broken leg repair, so I drilled the holes for that as well. 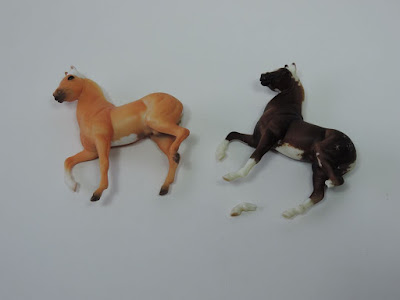 Lastly, I did a quick etching test to see if I could scratch out something that looked like tiny snowflakes.  They aren't perfect - but, *deep breath* that's okay.  I like the look and I think one (or two) of the ornament herd will end up being etched.  (something else I've never actually done) 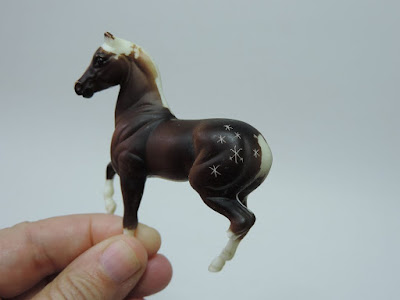