The Art of Taking a Break

When I finished with my first session of the TWH project a couple of days ago, I was pretty disgusted.  Nothing about it was even particularly hard to do; it really is work that I've always enjoyed and have missed doing.  But... I haven't done it in a long time.  I think I had other things going on in my head that day that were getting to me.

The whole time I was working on him, I was second-guessing myself.  I would check reference pictures, check again, search for more pictures, and check again...  and again.  Every move I made, I thought to myself, "that's not right, that doesn't look right at all".  After a couple of hours or so of that constant inner dialogue, I was exhausted and frustrated.  I thought he looked like garbage and I wondered why in the world I was even trying.

I showed him to Jeff that night, he said the horse looked good.  My (negative) inner voice piped in to say to me, "Yeah, well he doesn't even know what it's supposed to look like."  -and- "He's just being nice, it still looks like crap."

It's been a couple of days now and this morning I wandered into the studio, where the horse I had hated so much the night before last was still laying on my photo desk.  With some apprehension, I picked him up and looked him over.  This time my thoughts were, "Wow, he looks.... good.  No, really... I think I'm way closer than I thought...  Why was I so disgusted the other day??"

I think I've been learning a lot of lessons lately, about the creative process and life.  Such as: mistakes are okay, and: when things just aren't going right, I should take a break.

I'm hoping to be back to work on him soon.  Yesterday I bought a can of expanding foam insulation to experiment with for filling in his holes when the time comes.  My specialty has always been minis; I'm not used to working on such a big scale, or dealing with hollow horses.  I think that may have been part of my "problem" the other day; that and/or the self-loathing monster in my brain was on a rampage at the time, it's hard to say.

Or maybe it's all completely normal and I was just in the big green part of the pie chart below: 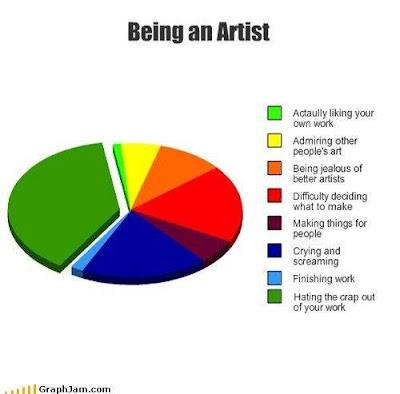 Being a creative person can be really tough, but I still love to create things.