Late to the Red Dead Party

There's a little video game that came out a while back, you might have heard of it: Red Dead Redemption 2.  I had been somewhat interested in the game (Old West, outlaws, horses, what's not to love?), but I also thought it would just be a bunch of shootouts, train robberies, and so on.  Oh, it does have those things, but also SO much more.

In August, while visiting a friend, I was able to try out the game on their PlayStation 4.  Playing with a controller was not something I'm used to.  I'm a keyboard and mouse PC gamer - far from a good one, haha, but that's what I am used to.

Controller unfamiliarity aside, I got hooked on the game right away.  I wanted to play it again as soon as I got home from that trip, but decided to wait and see if it would go on sale, maybe around the holidays.  Another friend, who also plays it on console, surprised me by buying me a PC copy for my birthday in September!

I haven't played it a LOT, but enough to start getting familiar with things and, no surprise: start collecting horses.

Sadly, it seems you can only have a few horses in the game.  I've already had to sell some that I liked, to make room for others.

I have already found a couple of the rare horses in the game, one by accident and one on purpose.

The splash white American Paint is apparently a rare horse.  I stumbled across her while out riding around.  I didn't even know she was rare at the time, but I had to get her. 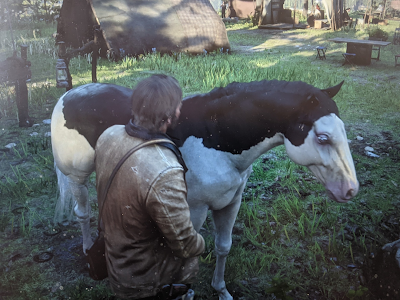 The next one is the "warped brindle" Arabian.  Found in the wild, I was SUPER excited to find and capture this guy.  He immediately made me think of Josie, from this year's BreyerFest. 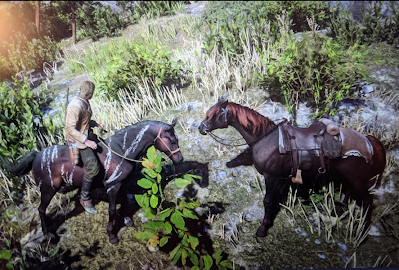 You can see my other horse there, too.  He is a liver chestnut Morgan and I love the red mane and tail they put on him.  I think most of the horse colors are actually well done and the horses are SO neat.

Not shown here is my current 4th horse, a big black Shire stallion that shows up early in the game.  He is huge and awesome.

The model horse connection here is that I think I want to paint some of these horses.  ;-)  Or something similar anyway.  Also, I have found myself inspired to make tack after playing.  It's good inspiration all around for a horse-related hobby I think.