Yesterday was the plant sale I've mentioned a few times.  I took a bunch of my baby leopard lily plants and a pile of laser stuff.  Most of that was inventory I already had on hand, but also several new plant/autumn-themed signs made up for the occasion.

It was a small sale; about five vendors.  There was a fairly steady flow of people stopping in to check things out and I had several sales.  I wouldn't say it was a huge success as far as income, but it was fun and I made a bit of profit, so that was good.

Here was my plant sale setup: 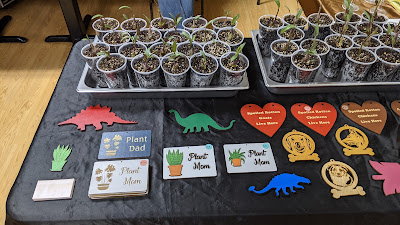 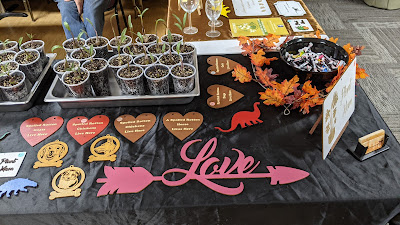 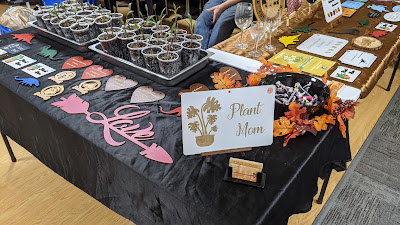 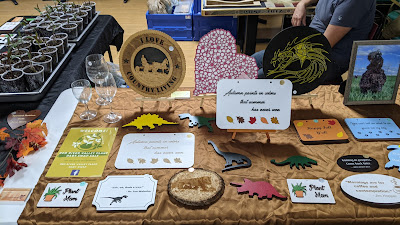 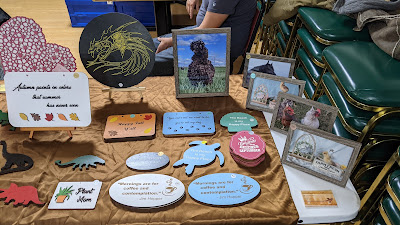 Probably the most fun experience for me was when a couple came over and started looking at things.  She pointed out the white and black sign with a Velociraptor outline and a quote from Dr. Ian Malcolm: "Life, uh, finds a way." and he snatched it up off the table.  Instant sale.  I asked, "Jurassic Park fan?" they both laughed and he confirmed it.  (Me too!)  That was great.  I had made a whole series of those signs a while back, each featuring a Dr. Malcolm quote, but I had only taken the one yesterday.  It's fun when something like that happens - when someone thinks a quirky thing you made is as fun as you think it is.
Oddly, it sort of ended up being dinosaur day, because later a woman stopped by who said her son really wants to be a paleontologist.  She bought most of the dinosaur cutouts.  I made those years ago and recently found them (dug them up?  haha).  I randomly decided to take them for something different and colorful to put out on the tables.  You just never know what might be popular!

After the sale, I met up with a friend for coffee.  We met at the farmer's market over the summer.  She would always stop by and visit with me and we would often chat for hours.  The market has been done for the season for a couple of weeks now, but we had exchanged numbers.  Yesterday we met up for coffee and another long chat.  That was really nice.
Today, I went and checked out a sort of consignment home décor/handmade store I randomly found out about last week.  They only offer handmade, repurposed, and/or upcycled type of stuff from local vendors.  I took a few things I'd made on the laser and thought I might ask about being a vendor there.  Ended up meeting the owner of the store and she seemed to really like my sample products.  She has someone who handles the admin side of things and said I should reach out to them.  I'm excited about the potential there, especially with the holidays coming.  I think it will be fun to get involved with a store like that.  Apparently part of the vendor agreement is to help man the store one day a month, I think that will be fun, too.  Everyone seemed nice, they were listening to music and laughing, fun.
Posted by Horse Tender at 9:17 PM