Here is the post I had planned to do yesterday, before it ended up being time for bed.

For a while now I've been gathering tools and supplies to start trying to make some model horse tack.  I decided to be brave and go for it yesterday and I thought it'd be good to start with a halter.

Tandy Leather was having a big sale on lace in December and I ended up getting 4 rolls of black calf lace, two of 3/32nd and two of 1/8th inch.

Mainly I wanted to have it to use on the Stagecoach project; I'm going to need a LOT of leather to make the harnesses when it comes time for that.  (Unfortunately I need 1/4" black lace for an important part of building the Stagecoach itself, but I didn't realize that at the time, so I'm still on the hunt for that)  Looking back I kind of wish I would have gotten some natural and/or brown lace too, but the main focus was the stagecoach and I'm planning to make everything there in black... I think.

Anyway, my plan for yesterday was to start out with making a leather halter, but I sort of chickened out and decided to do a "nylon" (ribbon) halter instead.  I have a bunch of 1/8th inch ribbon in my paper crafting supplies and I opted to go with a nice hunter green.

I used a real nylon halter to copy.  This one has nylon that is 2-3 layers thick on each section. 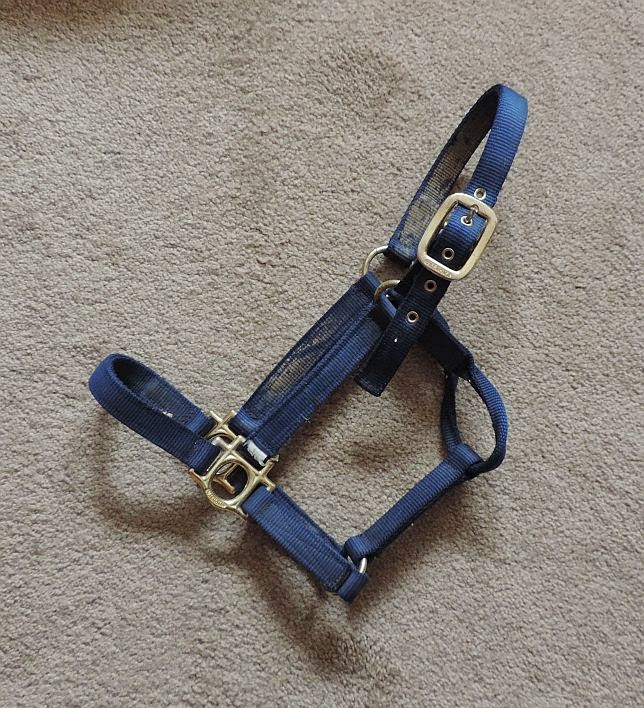 I ended copying the real halter, down to the direction that the material was wrapped through the rings and back on itself.  I also heat sealed all of the ends, I thought it would look even more realistic that way and also help keep the ribbon ends from unraveling.  I tend to burn candles when I'm in the Studio, but this was the first time I actually used one of them in making something.


To do the heat seal on the ribbon ends, I heated up the end of a small metal ruler that I have and then pressed it flat to the end of each piece of ribbon.  It worked wonderfully.  I also used the candle to heat up the end of a straight pin to make the holes for the buckle.

Speaking of the buckle, I used a Rio Rondo buckle, then shaped it and made a tongue for it, using this tutorial from Braymere Custom Saddlery.

I had a couple of problems, buckle-wise.  I have a sheet of them in all different shapes and sizes to choose from and I spent a bit of time with a piece of scrap ribbon trying to figure out which one to use.


I thought I'd picked the right size, but, based on how difficult it was to work with in the end, I think it might be too small?  I'm still not sure.  One problem is that I wasn't able to make my buckle tongue a tight enough fit, so it was flopping around on the buckle - not helping.  It looks like I need to get some smaller round nose pliers; the smallest circle shape I could make was still huge compared to what it should be.

The hardware needed a little prepping and after struggling to do the first tiny halter plate using my finger tips and sandpaper, I realized that I did in fact have MUCH better tools to use.

Behold, the jeweler's vise that has been living on the edge of my desk since I did the stagecoach wheels.  I've used it for other parts of stagecoach construction along the way - it really is a handy little thing!  But in between periods of coach work, it just sits.  It worked beautifully for several parts of building this halter, first for holding the hardware bits while I smoothed them out.


It also worked great to hold the end of the halter crownpiece while I burned in the holes with the heated straight pin.

After using sandpaper on the first ring, I switched to using these.


They seemed to work much better, especially for sanding off the burs on the insides of the rings, like the one in the picture above.  I had gotten them at a sale at a hardware/tool store while wandering around with Jeff this past summer.  They looked like they might come in handy - and they did!

Here's a quick peek during construction.  Unfortunately I didn't take much pictures while I was actually building it - I was having too much fun, but I figured I'd better take at least one in progress picture.


Another detail I added to the halter was a rolled throatlatch, using the real halter as a guide and this tutorial, also from Braymere.  I didn't actually roll the ribbon, but did use the technique of folding it in half and then gluing the tabs over the rings.

Overall it was a fun project and though it took me three hours (way longer than I had thought) I didn't mind.  I was just trying to get it done before bed, that was my only goal, and I pulled it off. 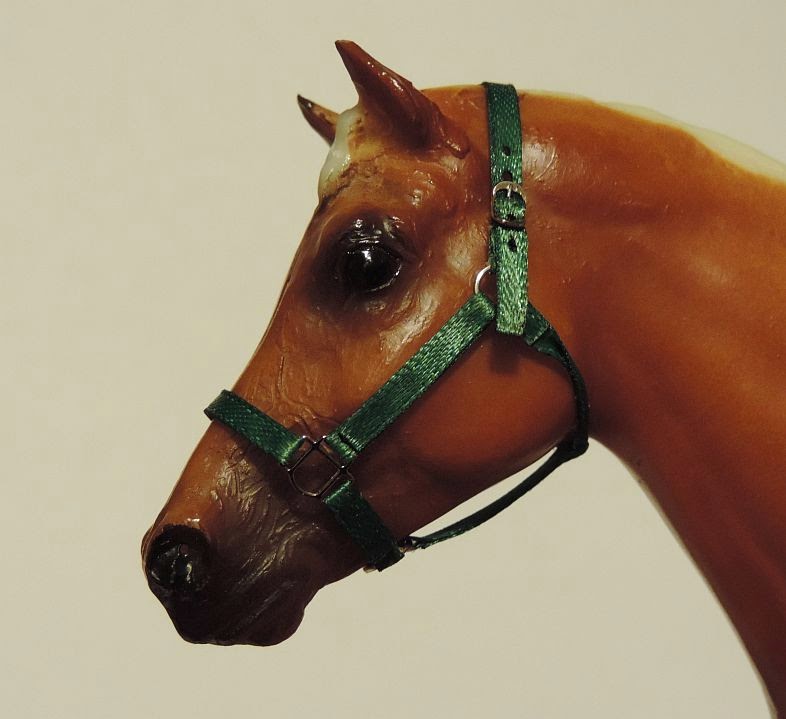 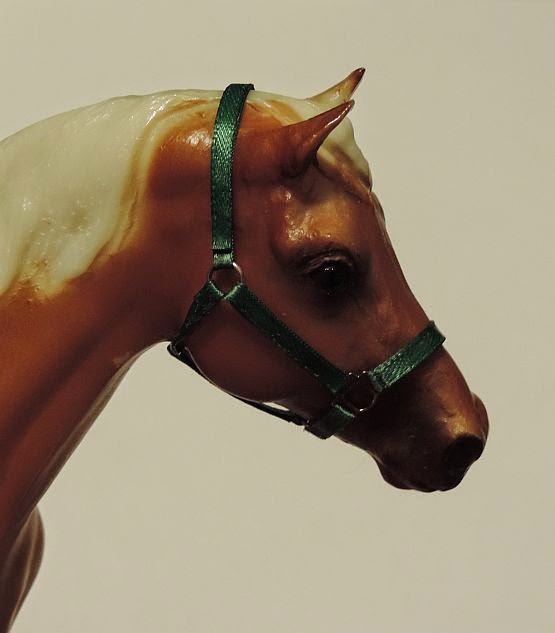 I'm hoping the next one will go faster, a lot of time was spent trying to decide the right size for everything.  I'm still not 100% sure if it fits just right, I think for one, the bottom piece, under the jaw, is too long.  However at least now I have some sort of template to use to make the next one.

Maybe I'll be brave and make a leather one next...