Yesterday I took a much needed break from the intensive studying.  I started off playing Minecraft for a little while and then I went to the studio.

I made a halter (yay!).  Then I randomly felt like tackling my scariest project at the moment: my first original sculpture.  I slapped some epoxy on him, including the first work on his head - to attempt to start making him look a bit horse-like, instead of a bird or an alien.  Then I started some work on the outline of his hindquarters.  (Pictures to come later on)

Big news I suppose was that I finished MY Lapis Lazuli saddle pad last night. 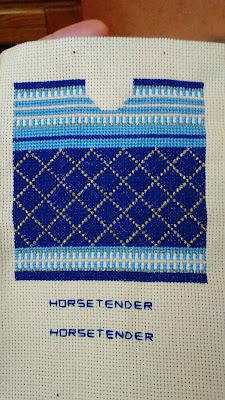 Well, the stitching anyway.  I now have a PILE of stitched pads, awaiting finish work.  I've kind of been hoarding them to do a couple of other videos on finishing pads.  They will be shorter videos, versus the nearly half hour start-to-finish epic that I filmed and posted a while ago.

As often happens, I was eager to finish stitching one so that I could start on another.  I just started the next one. 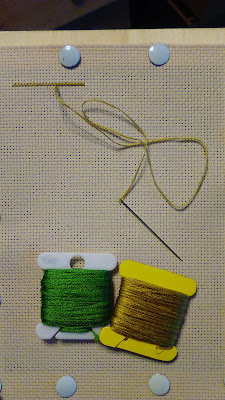 The colors green and tan have been on my mind, so that's what this next one will be.